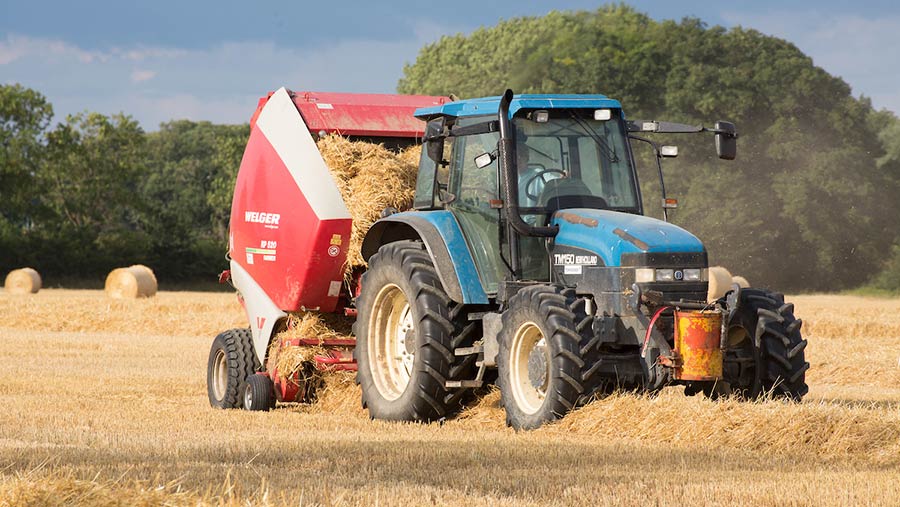 Hay has tumbled to below the price of straw in some parts of the country after losing half its value compared to last season’s record prices.

At Goostrey Produce Market in Cheshire, Ashley Waller auctioneers reported hay prices had tumbled to £60 – £70t compared to last year’s summer highs of up to £120/t recorded in the West Country .

Among the sale prices this season’s haylage averaged £52.00/t with hay achieving £60/t for round bales while square bales went slightly higher at £62/t.

A spokesman said it must be considered a buyers’ market and advised anyone with barn space to invest in good hay which was attracting a lower price per tonne than straw.

At the sale round-baled barley straw sold for £82/t with square bales at £90/t and square baled wheat at £76/t.

Merchant Andrew Holman of A&A Services in Selby, Yorkshire, reported that hay prices were down at £50 to £70/tonne according to quality.

“In the region farmers who had empty barns after last year’s fodder shortages, have gone out early and made high quality hay,” Mr Holman suggested.

“Those who waited longer were hit by rain showers and, despite higher yields, produced forage that varied from reasonable to ‘unsellable’,” he said.

An additional factor in the area was destocking as farms took drastic measures to cope with poor grass growth in 2018.

Mr Holman said he had been approached by a farmer who last year had been forced to buy in hay.

“By comparison, this year, the same farmer has sold off stock and seen higher grass yields and now has almost 500 bales to try to sell,” Mr Holman said.

But further south, Roger Parry and Partners in Shropshire, said it was the vendor who was happy after a strong trade for high quality standing straw at More Farm, Bishops Castle, on 9 July.

However, this is still well back on last year’s values when the company reported winter barley selling for £150/acre at the same farm.

Mr Parry said: “There have been varied results this year but this auction shows there is still a strong trade for top quality straw and the vendors are delighted with the outcome.”