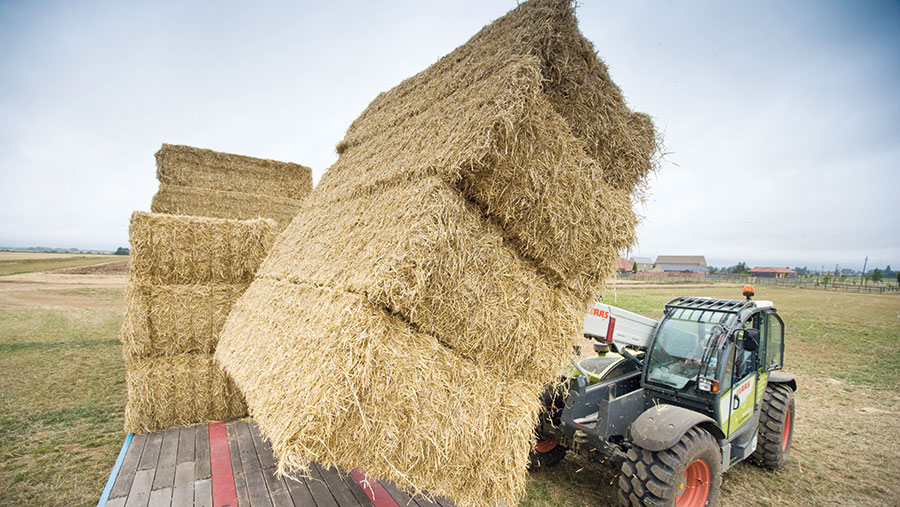 Auctioneers are warning there is no prospect of straw prices reverting to normal levels for the rest of 2018 as carryover stocks are virtually non-existent and standing crops in some areas are looking short and thin.

As decision time approaches for growers considering whether to chop or bale early cereal crops, prices per tonne of barley straw are forecast to be £90-100/t, with wheat about £70-80/t.

This is some £20/t higher than where the price started last season, said Wright Marshall auctioneer Andrew Wallace, but well below the £130/t some loads were trading at by the end of the season.

With agronomists warning of short, thin-looking crops in the ground, the Cheshire-based auctioneer said he predicts a buoyant trade, noting some merchants in his region are increasing their storage capacity in anticipation of firm prices.

The price rises cost some farmers an additional £70 a cow last winter, according to a report published in April by SAC Consulting, leading to a potential 19% decline in beef enterprise gross margins.

But livestock farmers hoping growers in the arable heartlands of East Anglia will moderate the trade by sending more straw west are likely to be disappointed.

John Hartwright, director at consultancy firm Laurence Gould, said while the higher prices would more than compensate farmers for the nutrient value lost by not incorporating, many of his clients are committed to chopping straw.

“They are very aware of the delays waiting for a baler can create,” he explained, saying that many are anxious to immediately start drilling oilseed rape or controlling blackgrass.

For those in the East who do regularly bale, many are supplying the four straw-burning power stations in the region on long-term contracts, said Mr Hartwright.

They take in excess of 900,000t/year at a price of about £40/t, depending on moisture content, some 9% of the total amount of straw used in the UK.

This scale of usage has drawn sharp criticism from the National Pig Association which recently warned that demand from power plants is contributing to the severe strain on straw supplies and is threatening the shift towards high-welfare straw-based systems.

They said some producers in the north of the country are unable to take in stock as they cannot source bedding, while other finishers are paying up to £150/tonne, almost the same as the cost of the grain.

Adrian Cannon, rural partner at Gloucestershire-based auctioneers Tayler and Fletcher, said he is forecasting higher straw prices than two years ago but does not expect them to hit the heights of last year when supply was lower than normal due to the wet harvest.

Early planted winter crops are looking well in his region he said which should also mean the standing crop at harvest is likely to be up on the year.

Growers minded to bale should therefore have more to supply, but he said others regarded the hassle as not being worth it at any price.

Donald Dunbar, senior agricultural consultant at SAC consulting, said that Scottish prices would be very dependent on the weather at harvest, with many growers only contemplating baling if there was a prolonged dry spell preventing wet swaths lingering in fields.

With virtually no carryover from last season, rain this summer would be likely to send costs soaring again as long-distance haulage from England took its toll.

His advice for straw users is therefore to talk to suppliers early and get a price agreed for their straw requirement for the whole season rather than buy per load through the winter when prices could be at their highest.

Unless they are in a mixed farming region and can set up a mutually beneficial straw-for-muck agreement with an arable farm, livestock farmers often regard themselves as price takers on the straw market.

But the extreme prices of last season are prompting some livestock farmers to look at other options for bedding after tight supplies and a long winter sent prices soaring to more than £130/t.

Donald Dunbar, senior agricultural consultant with SAC consulting, said he is seeing an increased proportion of new cattle sheds in the Scottish Borders having slatted floors.

This style of shed has in the past had an image of being less welfare-friendly, but he said the addition of rubber mats had improved cow comfort and were proving popular among farmers.

Others in the area have also been experimenting with woodchip aggregates which are a by-product of supply chain to wood-fired power stations.

The price of these stands at about £400 for an artic load, Mr Dunbar said, with farmers using them either under straw to form the base for the bed or as a full alternative.