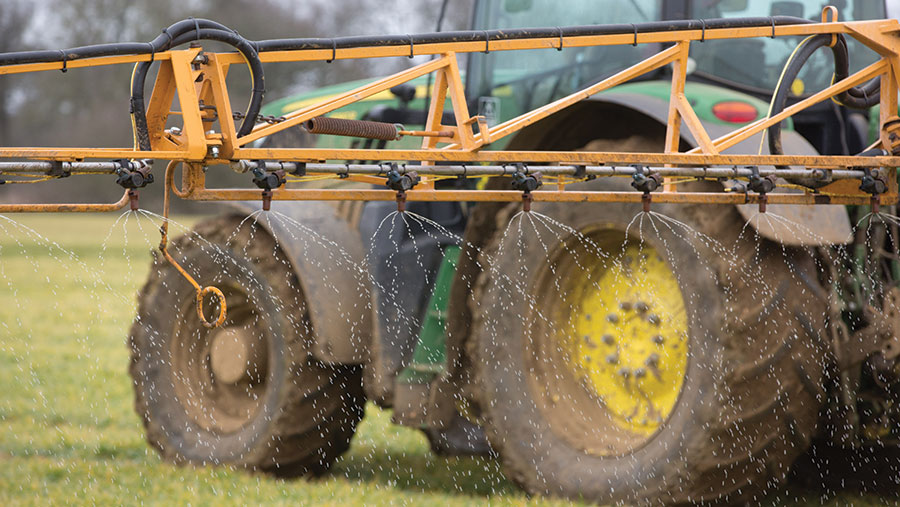 UK arable farmers are likely to see liquid fertiliser prices rise after the EU imposed a tariff on imports of urea ammonium nitrate (UAN) from outside the EU.

The EU’s Trade Defence Instruments Committee voted to implement the tariff by a narrow margin on 11 September, with the UK voting against.

Further detail on how and when the tariff will be implemented and reviewed is expected later this year.

The anti-dumping tariff, which will affect imports from Russia, the US and Trinidad and Tobago, will represent a cost increase of 6-9%, according to figures from Copa-Cogeca, the EU umbrella body for farmers and co-operatives.

UAN represents about 18% of the total amount of nitrogen fertiliser used in the UK, with ammonium nitrate taking a 60% market share and most of the remainder being urea, according to the British Survey of Fertiliser Practice.

Switching to alternatives would likely be a costly step for farmers who have invested in sprayers and storage, said NFU chief combinable crops adviser Jack Watts.

“Tariffs on UAN come on top of possible restrictions on the use of urea, although we are still waiting for a formal consultation from Defra,” he said.

“This all creates further consolidation in the UK fertiliser market – pushing farmers toward the ammonium nitrate market, over which there is concern about competition.”

He said it is unlikely the UK will completely scrap the tariffs after Brexit, as the government will likely want to align itself with EU foreign policy on Russian issues, but they may be eased on America in the event of a US-UK trade deal.

Cédric Benoist, a member of the Copa-Cogeca cereals working party, said the EU Commission’s justification for imposing the tariffs was based on an incomplete analysis and was a hard blow for farmers across Europe.

“It is hard for us to understand that the EU is ready to grant additional protection to a handful of EU fertiliser companies that are already highly protected by import tariffs,” he said.

The Agricultural Industries Confederation, the trade body which represents the UK fertiliser supply industry, declined to comment on the changes.