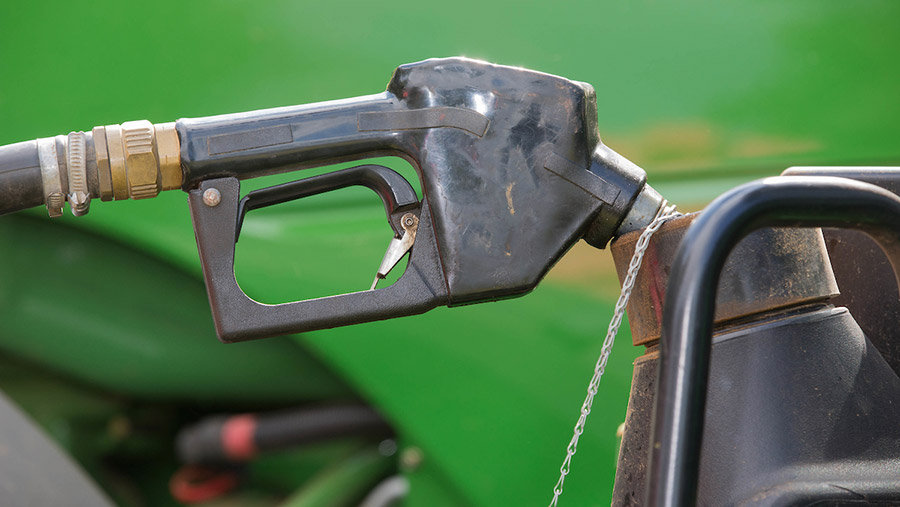 Farmers with fuel still to purchase ahead of the harvest season are set to benefit from a sharp drop in red diesel prices, after US crude oil prices plunged to a six-month low.

In the past week the Farmers Weekly diesel price tracker recorded a 3p/litre fall from 58.2p/litre, to 55.1p/litre based on a basket of quotes for 5,000 litres of fuel delivered within a 20-mile radius of the depot.

Prices now stand at similar levels to mid-January after peaking at close to 60p/litre in late May.

Global market analysts Refinitiv suggested that the driver for the fall in oil prices was a sudden surge in US crude stockpiles.

US stocks of crude oil, gasoline and diesel rose by 22m barrels last week – the largest rise in 30 years – to take total stocks to a two-year high of 483m barrels.

The high level of supply, coupled with concerns over the potential impact on trade caused by the ongoing tariff war between the US and China, saw West Texas intermediate, the benchmark US price, drop by $1.80/barrel (£1.42/barrel) to $51.68/barrel (£40.70/barrel).

The knock-on for red diesel prices should be good news for arable farmers but fuel supplier Rix Petroleum pointed out that most growers had purchased fuel ahead.

A spokeswoman for the company confirmed red diesel prices had dropped to 57p/l for a 1,000 litre purchase – down by 4p/litre since 20 May.

“We have seen a massive drop but we are not seeing an increase in buying because farmers secured the fuel they needed for harvest earlier in the year,” she said.