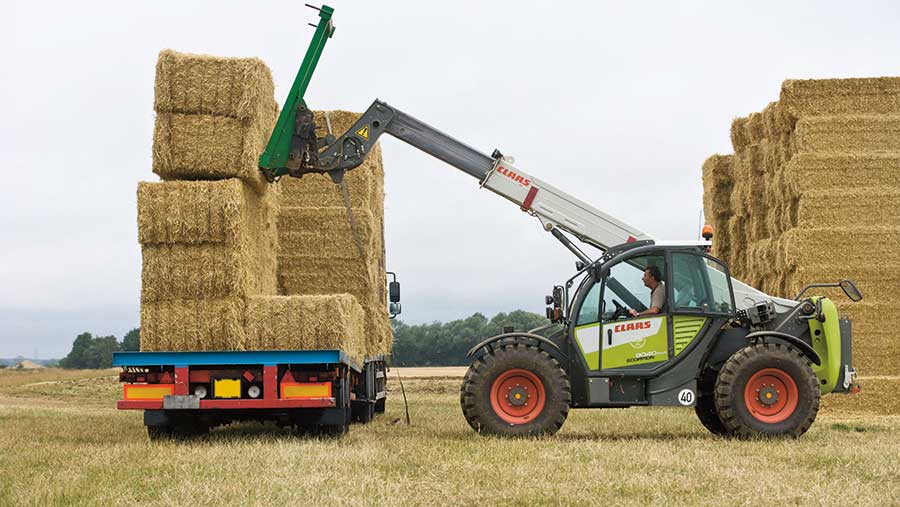 A glut of straw on the market is causing prices to fall and bringing some relief to livestock farmers enduring high feed, forage and bedding costs.

This is about £7/t lower than at the beginning of August for barley straw and £11/t lower than wheat straw, according to data from the British Hay and Straw Merchants’ Association.

There is significant price variation across the country, with the biggest sums being paid in Scotland, at £80/t this week for barley straw, and the cheapest in south-east England, at £60/t.

Perth-based straw merchant Stanley Johnston said prices were standing at £80-£85/t for barley straw in the north of England and Scotland after being closer to £100/t in August.

“There is far more straw around than farmers were expecting,” he said, which meant there was confidence among buyers to leave sourcing some of their winter supplies until the new year.

This was a concern for those with straw to sell, as there were still a large number of bales in the fields and arable farmers were getting anxious to sell them before the winter rains.

However, he warned that many northern livestock producers were also buying less straw as they had been scaling back cattle and sheep numbers to keep over winter due to soaring feed costs.

A survey conducted by farm management and consultancy firm Savills revealed 15% more straw land had been baled this year than in 2017, as good harvest weather and the prospect of high prices had tempted arable farmers who normally chop onto the market.

However, the cost of straw is still significantly higher than last year, with barley straw 37% more expensive than the prices for the week ending 22 September 2017 (when it averaged £51/t) and wheat straw 16% higher (when it averaged £47/t).

The market is currently in a lull between buyers who got themselves sorted at harvest, and those who are holding out for cashflow reasons until subsidy payments arrive in December, according to Hertfordshire-based John Barber, director of forage trading company Longhay.

There is still a significant amount of straw that was baled opportunistically at harvest that is being stored outside and has not yet been sold, said Mr Barber, with some sellers now anxious to sell before it loses more quality.

“When you look at Facebook there is still big blocks available. Quite often people have had to promise farmers that they will get straw shifted quickly and they are now struggling,” he said.

However, he said it was difficult to predict if the price would fall further as it depended on how much was sold for use in power stations as well as the autumn and winter weather, with bad weather likely to drive up demand for use for feeding as well as bedding.

Andrew Loftus, commercial director of Sellmylivestock.co.uk, an online platform for the trade of livestock, grain, feed and bedding, said the price that barley straw was being offered at had peaked at £100/t about six weeks ago.

However, he noted that despite concerns in the livestock community about straw availability at that time, relatively little had been traded at that amount.

He said the majority of customers had entered the market at about £75/t in early August, and that prices had settled at about £60/t currently, with a further £10/t discount on wheat straw.

Fine weather and good growing conditions have seen many farmers harvesting late crops of silage this week, which has helped to top up low forage stocks, but with shorter days and heavy dews it is now too late for the vast majority to make hay.

“If we get a long, wet winter there will not be enough hay to meet demand,” said Longhay’s John Barber, adding that competition from the equine sector would also help to keep prices firm.

He said demand was intense among merchants looking to secure supplies through the winter for their customers, but many farmers are reluctant to sell as they are anticipating price rises.