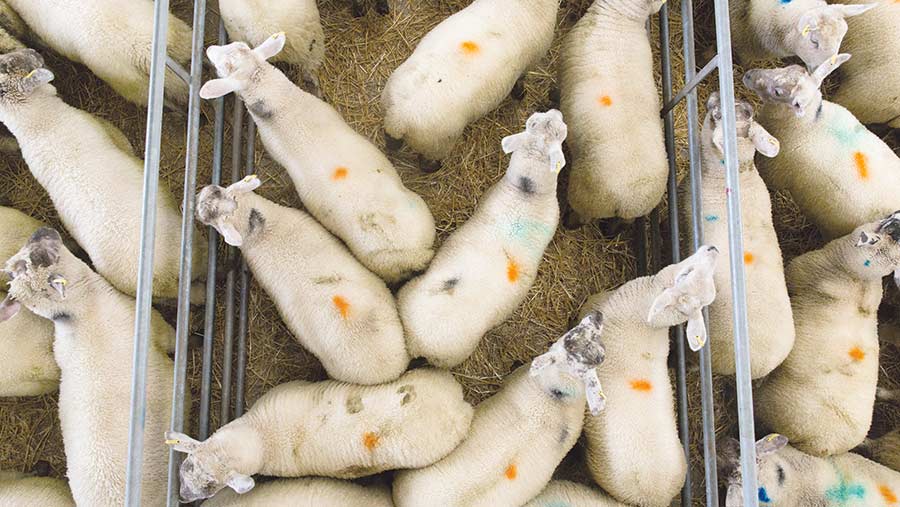 Marts are pointing to a combination of steadily increasing new season lamb (NSL) supplies and Islamic fasting to explain a 50-60p/kg drop in trade over the past two weeks.

However, Stuart Ashworth, director of economic services at Quality Meat Scotland, said prime sheepmeat prices may see support a week ahead of the Muslim festival’s conclusion.

Ayr market is yet to see significant NSL numbers at its Monday sales. Numbers were back 30% this week (28 May) with 152 through the ring compared with 220 last year.

Very blocky texels topped the NSL trade at £134 and others hit 281p/kg, with the whole sale averaging 247p/kg, about 40p/kg back on two weeks ago.

“It has been hard to get the quality up here,” Mr Kennedy told Farmers Weekly. “It has taken more effort this year to balance the supply of hoggs and spring lambs and keep the supply of lambs up.”

He predicted a shortfall in hill lambs coming to market as stores in the back end and as hoggs in 2019 following a long winter and difficult spring.

“Hill farmers have had it worst,” he added. “Some ewes were lean and abandoned lambs. Some hill farms are reporting between nine and 12 lambs per 20 ewes. You would expect 25 lambs in a typical year.”

Looking ahead two to three weeks, he predicts hoggs to be a better trade from 11 June as Ramadan comes to an end and NSL numbers to overtake hogg numbers at Ayr by mid-June.

Quality is making good money at Exeter where heavier lambs (48-49kg) are in short supply, although hogg prices have dropped 50p/kg on a fortnight ago.

Monday’s (28 May) sale saw heavy lambs making £137 and recorded a market average of 242p/kg, which was still 11p/kg up on the year, according to auctioneer Russell Steer of Kivells.

“Decent, in-spec lambs are in short supply now farms are into the tail-end of the hoggs, which are showing the effects of a challenging winter,” he told Farmers Weekly.

“We are perhaps seeing a little bit of resistance to some of the high prices. Good numbers of lambs are coming forward now and we are now in the middle of the Ramadan fasting period, which doesn’t help.”

Prime lamb prices have fallen to 250p/kg from highs of more than £3/kg before the bank holiday at Malton Livestock Auctioneers, North Yorkshire.