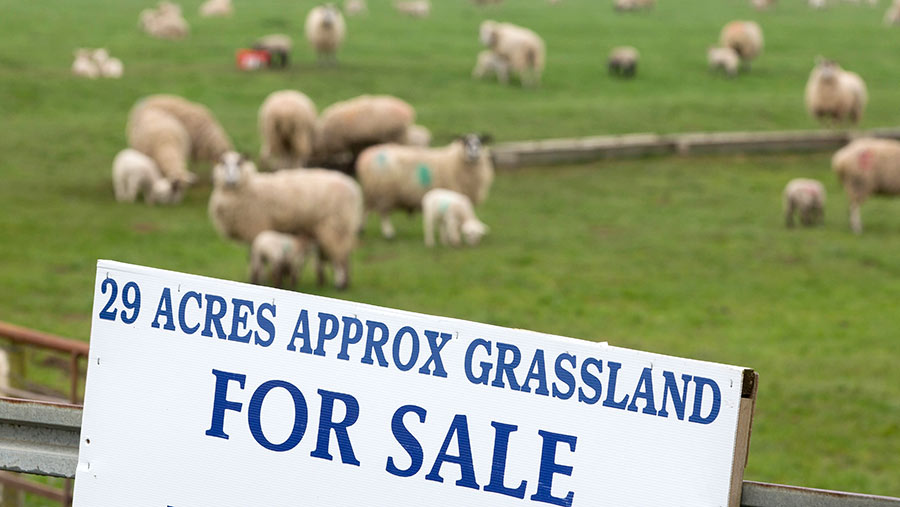 New factors are increasingly affecting the price tag of land, alongside the traditional influences.

With markets becoming more polarised, versatility will be increasingly important – the wider the range of crops and stock the land can potentially carry, the more attractive it will be.

Productive land with strong infrastructure, such as access to water if high-value veg is grown or if it’s suitable for grape production, will always generate interest. Such prime sites can change hands for as much as £25,000/acre.

BPS has been a lifeline to many farmers and has also put a floor in the rented sector, so its phasing-out over the next decade will hit farm incomes. Meanwhile, trade deals dictating post-Brexit global market access and tariffs will be key to the ability of land to generate agricultural revenue.

When the new Environmental Land Management schemes (ELMs) are rolled out, a two-tier market could emerge, with the most fertile land and that attracting natural capital payments being most sought-after.

A change of government could herald new tax laws, possibly removing rollover relief on capital gains tax and the favourable inheritance tax treatment of the asset.

This would exert a downward pressure on its values, as would a “land value capture tax”, which has been suggested in some quarters.

Freehold, unoccupied land will always change hands for the most money. The presence of a tenant can wipe 25-50% off the price tag, depending on the type and terms of the tenancy.

Neighbouring farmers have traditionally fuelled demand for land. The desire to spread costs will become more of a driving force after Brexit.

It’s not just a queue of keen-to-expand local farmers who can create a bidding war, though – the presence of one land or property owner keen to join up their existing holdings or gain extra privacy and security around their main residence can be a decisive factor.

Recently we heard of a deal for a large block of mediocre grassland where the buyer, an international film star, paid three times the going rate.

High pheasants, fast grouse and strong salmon can send prices skyward, but the interest in leisure activities can also bring an amenity premium from those with land-hungry hobbies – whether it’s driving off-road vehicles, looking for outdoor adventures or wanting to do their bit for the environment in a diversity-rich woodland.

Alongside the residential element, modern highly specialist or versatile farm buildings are a growing draw for some buyers and, given the current favourable Permitted Development Rights rules, older traditional structures with conversion possibilities can boost prices.

The extent and condition of infrastructure such as roads, tracks and boundaries is also important.

Regardless of the overall economic uncertainty, housebuilding is continuing apace and can mean land otherwise worth £6,000-£8,000/acre could be worth up to £1m/acre with planning permission for residential development.

Don’t forget what could be under it, too, such as valuable mineral deposits, or the opportunity for landfill or fishing lake ventures.

A big concentration of population nearby can be a springboard to diversification opportunities, whether it’s let buildings, caravan storage or self-catering cottages.

It can be a double-edged sword, though, as urban fringe farmers can be hit by fly-tipping, trespassing and livestock worrying.

Simply the postcode can be a big draw or turn-off for some lifestyle buyers and investors who deem certain areas inherently more desirable than others.

See also: How to diversify agricultural land: building to rent or sell

There’ll always be those who have made money outside of agriculture looking to acquire a piece of our green and pleasant land. Easy access to cities such as London, Bristol, Birmingham or Edinburgh will put land in the sights of such individuals.

But they’ll also be drawn by the presence of a beautiful period house and stunning scenery in a “fashionable” county, particularly if the land is free from footpaths and is not under a flight path (the absence of these could add a premium of 30% or more).

Often it’s debt, divorce and death that bring land to the market. In the first two areas, sellers often want to move quickly, meaning there can be deals available, especially for cash buyers.

In a challenged market, sellers search for angles to hook buyers’ interest, so having a “story” attached to a piece of land can open the door on publicity.

Has it had a famous previous owner? A connection with a historical event? Appeared in a blockbuster movie? Such seemingly small stories could be precisely what gets it in front of would-be buyers and generates a buzz.