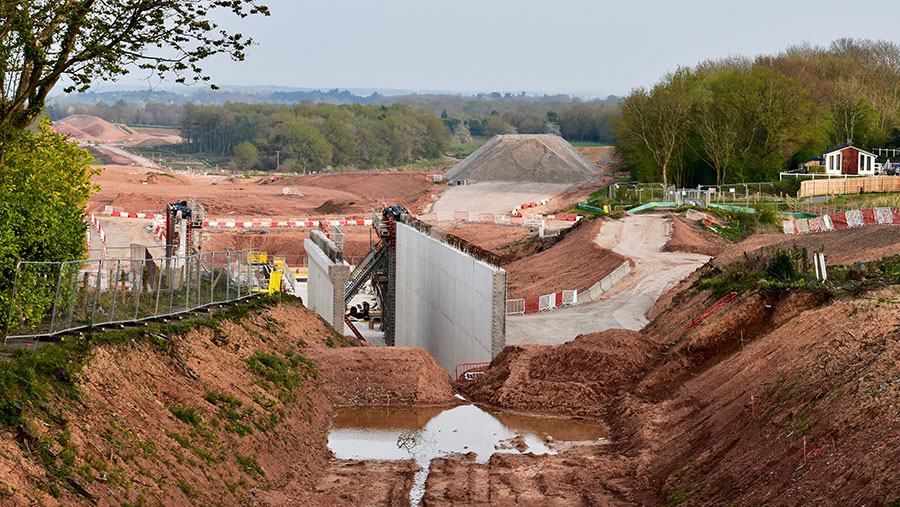 Proposed changes to make the compulsory purchase regime faster and more efficient will see landowners forced to sell their land below market value, the Central Association of Agricultural Valuers (CAAV) has warned.

It says the move is one of a growing list of proposals under consideration that seek to erode property rights.

A government consultation has been publishing proposing reforms to help stimulate public sector development, including housing, regeneration and infrastructure, in England and Wales.

See also: HS2: How landowners and farmers should plan in face of uncertainty

The most significant change would be to enable local authorities and other public sector acquirers to take land without necessarily paying for “hope value” where there is already the opportunity for development.

Under current rules a landowner will be paid an open market value for their land, taking into account actual or prospective planning permission.

It is the value attributed to prospective planning permission that is sometimes referred to as “hope value”.

Jeremy Moody, CAAV secretary and adviser, said the government was proposing that there would be one price when land is sold on the open market and another, lower one when it is taken by compulsory purchase.

“History shows that such a two-tier market will be seen as unfair and lead to difficulty and complexity,” he said.

The Levelling Up and Regeneration Bill would allow “public sector entities” to ask the government for authority to cap compensation at existing use value.

The “Compulsory purchase: Compensation reforms” consultation proposes to go even further, by capping or removing hope value either for compulsory purchase generally or in relation to specific types of schemes.

The government argues at present the hope value compensation rules can lead to “elevated levels of compensation” being paid and that a “fair” price would aid the viability of schemes.

“But it opens the door to paying less than market value for property taken by a public sector body,” said Mr Moody.

See also: How government’s levelling up plans will affect farmers

Other measures in the Bill include the infrastructure levy, changes to local plans, and the creation of locally led development corporations.

The CAAV said that suppressing land value in this way could be part of a drive for new settlements, with land taken for that new housing at less than its possible market value.

There is only a short window in which representations can be made, as the consultation closes on 19 July.

“The question is whether policymakers, who are almost never on the receiving end of compulsory purchase, either understand or care about property rights and their powerful role in the economy, for businesses, families, and as an enabler of investment,” said Mr Moody.

More information, including how to respond, is available on the gov.uk website.

The CAAV pointed out that this is not the only proposal on the table that will see property owners left disadvantaged.

Plans have been put forward to further weaken landowners’ rights and degrade value under the Electronic Communications Code.

“Where policies make property a plaything, distort markets and focus on symptoms, not causes, that weakens the economy and stores problems for the future,” said Mr Moody.