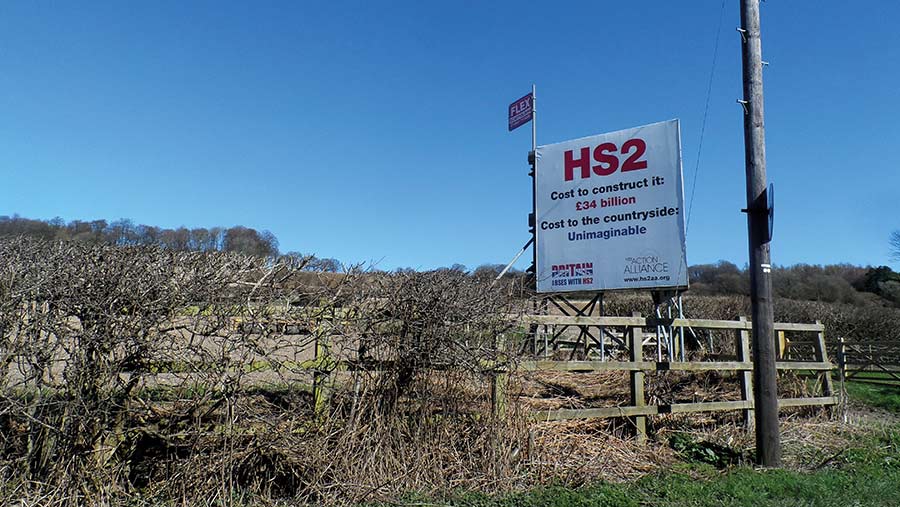 Farmers left in limbo while the government reconsiders the route of the controversial HS2 high-speed railway project have been urged to prioritise determining the future of their businesses.

HS2 was originally meant to connect London with Birmingham, Manchester and Leeds.

However, transport secretary Grant Shapps announced in November that most of the proposed eastern section of the route would no longer run to Leeds as planned, stopping instead at East Midlands Parkway.

The news left landowners and tenant farmers along the route mired in uncertainty, as the area remains in a safeguarding scheme, meaning it may at any point become subject to a compulsory purchase order (CPO).

A CPO is a legal function in the UK that allows certain bodies which need to obtain land or property to do so without the owner’s consent.

Compensation for this has long been criticised for being both too low in value and taking an inordinate time to be paid.

Rebecca Collins, technical and policy adviser at the Central Association of Agricultural Valuers, said there has been no further official announcement on the eastern leg.

“It is still being reviewed, which makes it difficult because farmers are reluctant to sell and move on if they don’t know where the route will be going,” she said.

“They have to continue living under the shadow of the works, with uncertainty around the final design and timescales.

“The Department for Transport has indicated that a further announcement will be made as soon as the work to consider all options has been concluded, but there is currently no timescale on this.”

The Bill for the western leg – Crewe to Manchester – was deposited in parliament in January and is awaiting its second reading.

“Farmers on that route should be proactively engaging with HS2 and preparing for petitioning, which is expected to start this autumn. Speak to a trusted adviser and don’t miss the window of opportunity,” said Ms Collins.

Phase one (London to West Midlands) is still carrying on and farmers along that route should anticipate more people coming onto their land to complete environmental surveys, she said.

Anyone based on the proposed HS2 route should not delay reviewing their businesses and making any necessary decisions and changes because of this uncertainty, said Ms Collins.

“There are so many other known changes coming that farmers need to adapt to – such as the loss of BPS, and increasing environmental and climate change targets and regulations – so they need to start reviewing now to have enough lead time to make decisions,” she said.

“Make sure you have a trusted adviser on board who will take a holistic review of the business – tax, practical implications and all.

“It’s good to have a CPO and utilities specialist, but it might be best to combine them with someone who knows the farm well.”

They discussed delays in compensation, the heavy-handed use of general vesting declarations to permanently acquire land, and incidents where works have led to drainage problems and flooding.

The union pushed for habitat mitigation management agreements, with payment rates, to be sent to affected farmers to allow proper consideration of whether they want to keep ownership of land.

It also highlighted the effects of the project on farmers’ mental health, particularly where the upheaval has been combined with poor communication from HS2 Ltd.

She added: “The meeting was an opportunity to set out to the minister the experiences of many farmers on the route, who have had to endure years of mounting financial pressures and uncertainties that have caused huge stress and anxiety.

“HS2 is still failing to provide relevant information and to compensate farmers on time, or to address claims adequately.

“We recognise the importance of the nation’s transport infrastructure, but it is essential that farm businesses are left in a strong, viable condition where land can still be farmed productively.”

A follow-up meeting with the minister is expected.

Other demands on land

The government’s £27bn Road Investment Strategy includes: dualling the A66 Trans-Pennine road; upgrading the A46 Newark bypass to address congestion; and building the Lower Thames Crossing.