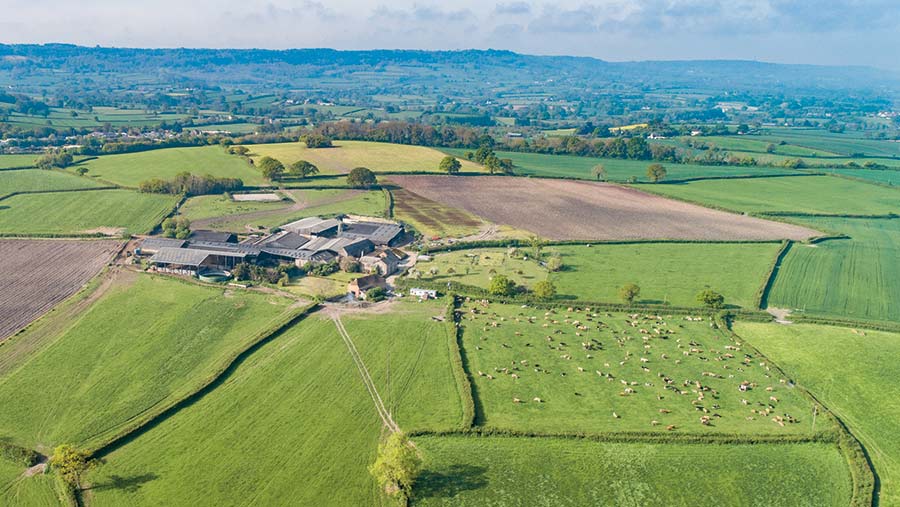 Both modern and traditional dairy units are attracting strong demand from a range of buyers, agents say.

As with all farm types nationally this year, supply of dairy farms remains limited, despite a tempting mix of potential purchasers.

Dairy farmers, non-dairy farmers and lifestyle buyers all see holdings with an array of building types as strong investments.

However, for people purely interested in continuing in the dairy business, quality is key.

A number of dairy farms are on the market with Carter Jonas in south-west England, where the land market is generally well-supported by a pool of buyers looking to move to the region.

Hamwood Farm in Somerset was launched in May and is already under offer, thanks in part to being well-equipped and in a good location, says David Hebditch, partner at Carter Jonas, based in Taunton.

“Enterprising buyers are being flexible about location to get the right farm and are willing to relocate from places such as the Midlands,” Mr Hebditch says.

“Dairy farmers do want to be where there is a decent milk contract, a market not just for milk but also for their cows, and somewhere that is accessible – but the quality of the unit is the most important factor.”

Non-dairy farmers are looking at the facilities onsite, such as large covered buildings, to see if they would suit other livestock enterprises such as a beef unit.

Where buildings are in need of an overhaul, the offering becomes more attractive to lifestyle buyers, who are interested in how they can use and convert traditional buildings and are less concerned about maintaining modern buildings.

Richard Nocton, partner at Woolley & Wallis – covering Wiltshire, Hampshire, Dorset and the New Forest – agrees that demand for both modern and more traditional dairy farms is strong, with few available on the open market.

“The sale of dairy farms is often triggered by the younger generation not wishing to continue with the cows or if a good herdsman leaves and a replacement cannot be found at an economic rate,” Mr Nocton says.

“There are still very strong dairy buyers who have good milk contracts wanting to acquire the large, well-equipped farms.

“A dairy farm has to be ready, up and running when it is bought – it’s much harder to do improvements to a parlour when you’re trying to put through 550 dairy cows on day one.”

Having a good milk contract and a supplier that can collect affects what a dairy farmer is prepared to pay, he says.

For non-dairying buyers, it is predominantly the buildings that make such farms attractive.

As with other types of farm in the UK, values of land are starting to widen, Mr Nocton says. For the very best farms, of a commercial size, values will reach £9,000-10,000/acre. However any slight blight and values start to fall away quite sharply towards £7,500/acre.

Looking ahead, Mr Nocton believes the steady decline of dairy farms is set to continue.

“I believe that we will sadly see a decline in the smaller family dairy farm and a rise in the much larger units, with the continuing trend of cows being milked by robots,” he says.

Will Handel, partner at Greenslade Tayor Hunt, is based in Honiton and said the market remains positive but cautious due to the degree of uncertainty.

Land values continue to fluctuate, he said, with £10,000/acre a typical price for a mid-range dairy holding.

“The big question is what’s going to happen next with land values,” Mr Handel said. “I think rather than changing dramatically they will just level off.

“The market remains variable but I’m optimistic about it.”

Selling your land can be hugely stressful but with some knowledge of the system and help from a land agent, you can achieve a lucrative profit for your property. In episode 3 of the Ask the… Land Promoter series, experts from Rosconn Strategic Land share some of their 16+ years of experience in selling a wide variety of land parcels. Join our webinar for practical advice on how to get your land ready to be sold, whether you are about to sell or thinking about putting your land on the market in future. Tuesday 21 September 5pm - 6:15pm.
Register now