The effects of Covid-19 and the uncertainty of Brexit in 2020 stifled an already low-volume land market in Northern Ireland.

With the market only beginning to gain momentum in June, following the winter hibernation and the first lockdown, it soon became apparent that the land supply would remain restricted, says James Butler, head of country agency at Savills.

Many who had been contemplating selling put their plans on hold and the number of large farms (more than 100 acres) launched was historically low.

Typically, the average size of each farm or block of land offered for sale is 30-35 acres, with between 0.5% and 1% of the province’s total area of farmland coming to the market each year, according to Mr Butler.

Buyers are aware that only one or two viable standalone units in each farm type are available in a 12-month period.

“This is resulting in competitive bidding in every sale, with the majority funded by non-farming cash,” he says.

“Investors are prepared to be flexible on location and will wait for the right farm to come to the market, paying a premium to secure it.”

Average values remained resilient at about £10,000/acre, though prices spread widely around this, influenced by property quality, local demand and other special purchaser motivations.

Hill ground is experiencing a more diverse buyer pool from those with forestry and environmental interests, again with buyers having a very limited number of farms to select from.

“The majority of buyers of commercial farms are typically already based in Northern Ireland, meaning that the Covid-19 restrictions proved to be less problematic for carrying out viewings,” says Mr Butler.

“However, we have experienced an increase in demand for lifestyle and amenity farmland from international buyers with Northern Irish heritage who no longer need to work abroad and are attracted to more space and being closer to family.”

In the short term, he anticipates average values to hold firm, supply to remain low and increasing demand to come from cash investors attracted to farmland’s security, green space and taxation advantages. 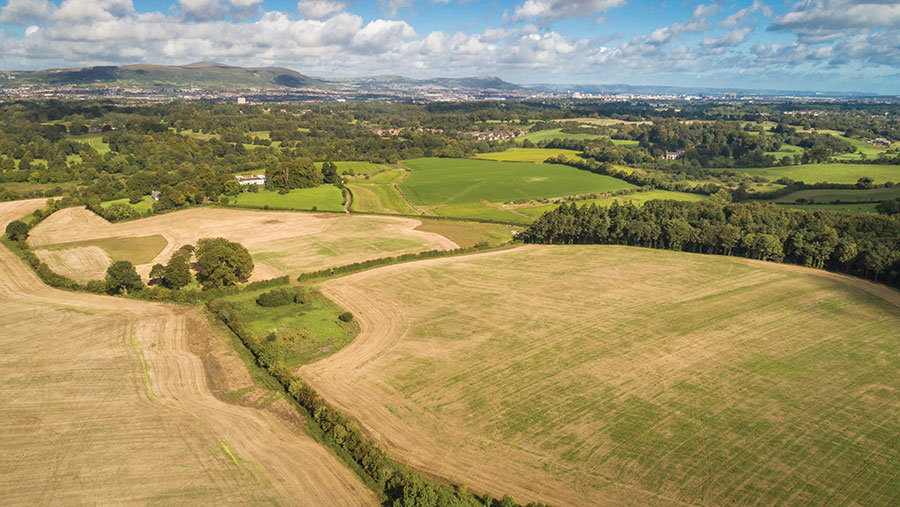 Savills sold Newgrove Estate, near Belfast in County Down, in spring 2020.

The 149-acre arable farm has a seven-bedroom house and a range of farm buildings.

About 19 interested parties viewed the holding over a three-month marketing period and it sold in the region of its £2.1m guide price.

This week marks the end of Farmers Weekly’s annual regional analysis of the land market across the UK.

Here are some key numbers for the 2020 English and Scottish land markets, compared with 2019:

If you missed your area’s land information, you can find all the land round-ups here, along with further insights, advice and case studies.