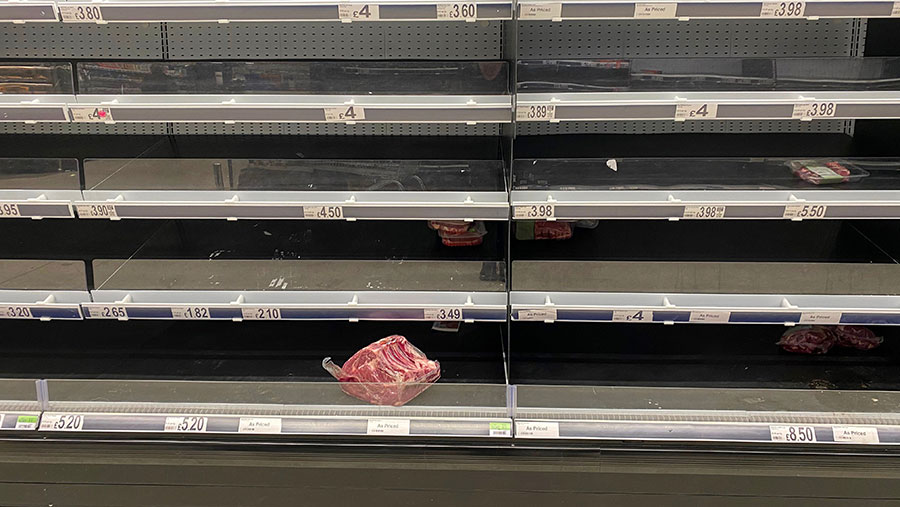 Beef and lamb supply chains have been rocked this week as businesses grapple with the complete closure of restaurants, pubs and most fast food outlets.

But with shoppers clearing shelves of meat within hours of them being restocked, many farmers want to know why prices have not been rising.

The food service sector normally contribute 45-50% of the calories consumed in the country and reconfiguring all of that supply into the supermarkets was an enormous challenge, said NFU chief livestock adviser John Royle, particularly as consumer eating habits at home differ sharply from what people choose when dining out.

Buyers warn consumers in the UK and Europe are not going to eat as much lamb in the home as they are in meals out, so they are adjusting their buying habits accordingly.

A number of auctions have been cancelled at short notice to avoid contributing additional numbers to a market which buyers said is already oversupplied.

Lamb prices at livestock markets on Monday fell by 27% on the week as buyers in some cases did not even bother turning up.

This was despite the number being brought for sale falling by 53% to just 10,324 lambs across the whole of Great Britain.

The price fall means a typical 44kg lamb has lost more than £30 a head in value.

Mr Royle said he had reports that demand in France had slumped in just the past few days, despite their lockdown coming into effect on 17 March, as stockpiling had finally peaked.

He said if confinement continues, there may be another uptick in buying in one or two weeks as some of these supplies get used up.

“What we are saying to members is remain patient where possible until we see restrictions are lifted or food service demand gets realigned,” he said.

However, he said if low prices continue in the longer term, the NFU would be pressing Defra to dust off some of the hard Brexit contingency plans that were prepared to give the agricultural sector additional price support.

Mike Gooding, director at lamb buyer Farmers Fresh, said shoppers would choose to buy more of other proteins due to both price and convenience.

“Effectively, the home consumption market for lamb is low,” he said. “We will see a lag before that increases.”

He said some of this would be mitigated if supplies of other meat was in short supply, and he was keen to point out that there is no logistical barrier to moving lamb into Europe, but demand was also depressed among consumers there.

However, there were reports of some additional administrative delays at borders.

News agency Reuters reported yesterday (23 March) that the trucking industry was struggling to find drivers willing to go to Italy, and food freight costs were increasing as firms struggled to find return loads of other goods, with many industries shut down.

Farmers should make sure not to leave ordering eartags until the last minute, as there are reports that deliveries are being delayed, said Mr Royle.

Some manufacturers are having staffing issues and Royal Mail are also no longer committing to next day delivery, he explained.

The issue is likely being compounded by an uptick in demand at this time of year as farmers tidy up missing tags in cattle ahead of turnout and order supplies for this season’s lamb crop.

The liveweight prime cattle average fell by 5p/kg on Monday, as buyers digested the news that McDonalds, the country’s biggest beef buyer, is to close all of its outlets.

However, Nick Allen, chief executive of the British Meat Processors Association, said all abattoirs are currently up and running, with some extending shifts and opening on the weekend to keep up with supermarket demand.

“One of the problems over the past five to six days has been a bigger demand for mince while other parts of the carcass get left behind,” he said.

Carcass balancing getting out of kilter was driving down the value of animals, as there is wafer-thin margins on mince, he said.

Mr Allen stressed he did not think the supermarkets were putting pressure on the supply chain deliberately, but just responding to what consumers want the most, as mince is easy to transform into a variety of recipes.

However, with shelves being cleared of all meat products in some circumstances, he urged retailers to keep a diverse supply of cuts on shelves, as well as mince, to make the most of every carcass.

The lesson from Italy is that keeping shelves full will end panic buying, he said.