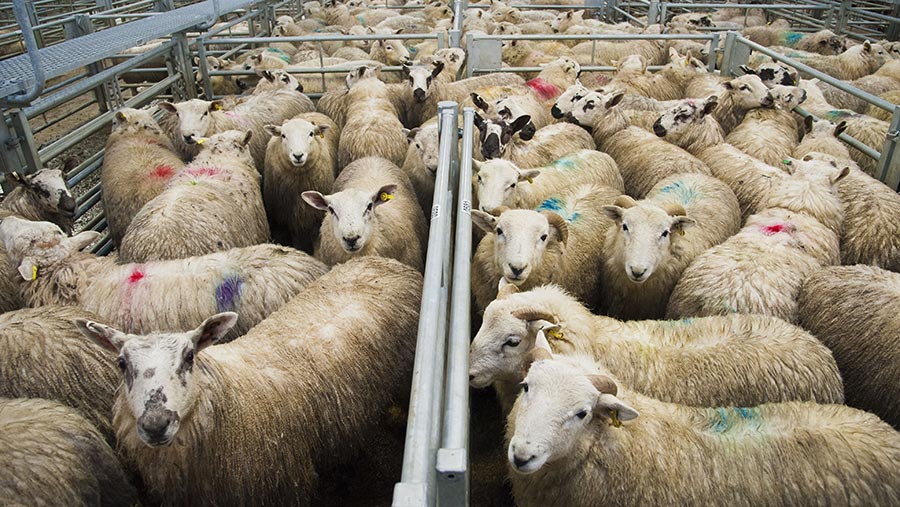 Finished lamb sellers are unlikely to see prices increase as rapidly this season as in the spring of 2018, despite fewer lambs coming forward for sale and declining New Zealand imports.

Market analysts are forecasting there will be one million fewer UK fat lambs sold in the 2018-19 marketing season after harsh weather in spring 2018 sent mortality rates higher.

Prices last week dipped below year-earlier levels for the first time since November, but still stand well above the five-year average.

Deadweight prices in 2018 rose to their highest-ever level of 536.7p/kg at the end of March, to coincide with Easter Sunday on 1 April after 22 weeks of consecutive growth.

However, Jonny Williams, senior livestock procurement officer with Scottish meat marketing co-operative Farm Stock, said he would be amazed if prices hit the peaks they did last year and were unlikely to go above 500p/kg deadweight.

“Easter Sunday is very late this year on 21 April and the following week is Ramadan, so potentially we will see a late surge in prices in that fortnight, but I don’t think until that point we will see any major price spikes,” he said.

Mr Williams said numbers of lambs sold this season are down 8% but carcass weights are up about 6%, meaning most of the shortfall has been compensated for.

This means the effect of lower domestic lamb numbers and declining imports from New Zealand may not support prices as much as anticipated.

A recent AHDB report forecast the country will have 4% fewer lambs available for export purposes in 2019 than the previous year.

The average deadweight lamb price for the week ending 9 February rose by 0.8p/kg to stand at 425.8p/kg for lambs within the SQQ weight band of 12-21.5kg.

Farmers are taking a pragmatic approach to the risk of marketing lambs after Brexit by holding fewer back for the Easter market, which falls after the withdrawal date of 29 March, and selling them as they come ready, said Mr Williams.

If the UK fails to secure a withdrawal agreement with the EU by the end of March, or extend the transition agreement, the AHDB estimate the value of lamb would fall by about one-third as exports grind to a halt.

Some markets are reporting increased demand for smaller lambs in the fat ring as specialist finishers buy them from other producers to hold back for the Easter market.

Prices improved this week at some Monday and Tuesday sales, with auctioneers reporting increased demand for lighter and standard weights of up to 38kg.

This is despite the annual decline in demand from European consumers at this time of year as new-season lambs from France and Spain replace the UK export trade, said Mike Gooding, director of farmer-owned export specialist abattoir Farmers Fresh.

The finished lamb market is split between domestic supermarket buyers, which want an identical 19kg deadweight carcass all year round, and overseas customers with seasonal demand for a range of carcass sizes from 10-15kg.