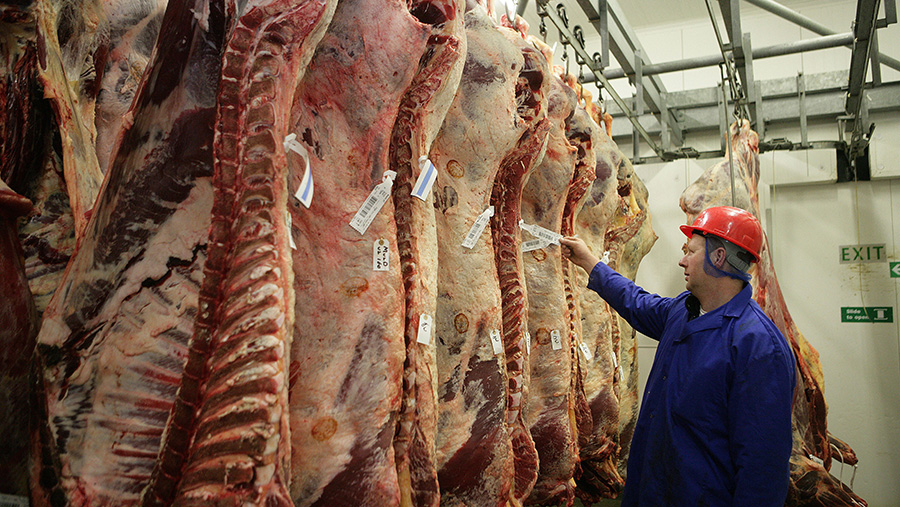 Concern is growing that changes to processor carcass classifications will cost some producers tens of thousands of pounds.

Most processors have narrowed their grading specifications in the past six months, pushing more animals outside the desired grades and increasing penalties.

Producers and farming leaders say they are worried the changes are being used to lower cattle prices, rather than meet retailer needs.

Beef producers continue to struggle with low commodity prices. Deadweight GB steer prices were down 4.4p/kg in the week ending 2 April to 319.2p/kg, having lost 16.9p/kg since January and 29.1p/kg since the same week last year.

If the grid was fair and if it was about rewarding quality, the rewards would mirror the penalties, but what we see is the penalties are now much harsher John Royle, NFU

John Royle, chief livestock advisor at the NFU, said some producers were losing £120 an animal as a result of the grid changes.

“If the grid was fair and if it was about rewarding quality, the rewards would mirror the penalties, but what we see is the penalties are now much harsher.”

On some grids, the best bonuses are now 35p/kg but the worst penalties are 250p/kg, while penalties for dairy cattle have risen from about 25p/kg to 60p/kg.

“Clearly the market should incentivise farmers to produce to spec,” said Mr Royle. “[But] we will always have a portion of our beef that is black and white steers and plainer sorts that fulfil the market for mince.”

An anonymous producer said he lost £500 on 28 cattle because of the changes. He received bonuses of £300 for two-thirds of the load, which were beef bred, but faced penalties of £800 for the remaining third, which were Friesians.

He estimated his annual revenue would be £26,000 down on last year as a result and said another producer he knew had delivered a load of 40 cattle and received £4,000 less than he previously would have.

The more complicated grading specifications – particularly ABP’s which now had 225 classifications – were making it almost impossible to know what returns to expect.

“With the best will in the world, no matter how accomplished you are, it’s almost a lottery to pick that bullock and know what is coming back to you,” he said.

As a result many producers feared the risk associated with dairy-bred cattle and the knock-on effect for dairy producers could make bull calves almost worthless, he said.

At Devon’s Sedgemoor livestock market cattle lacking confirmation were proving harder to sell than 12 months ago, and Friesians were selling at about £100 less as a result of the grading specifications, said Robert Venner, partner at auctioneer Greenslade Taylor Hunt.