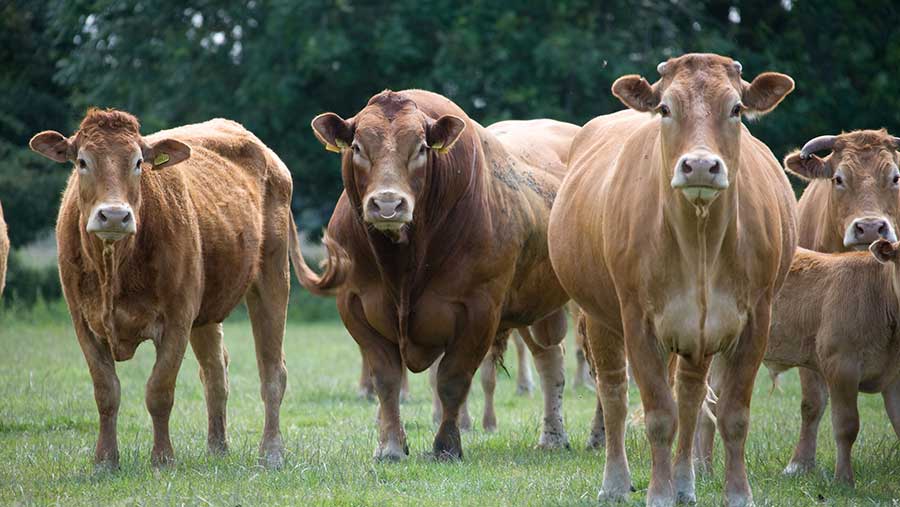 Producers are seeing returns of 7-12p/kg deadweight less than they were a year ago, on top of extra feeding costs.

Despite a drop in numbers, GB deadweight prices were down in most classes of cattle in the week ended 2 February, with GB steers averaging 350.2p/kg, a drop of 1.5p on the week, and heifers at 350.8p/kg, down 0.5p.

See also: How a group of beef producers gained control of their supply chain

Heifers and young bulls fared slightly better in live markets in the week to Tuesday, rising by 3.7p and 4.3p to average 199p/kg liveweight (lw) and 177.3p/kg lw respectively, with heifer numbers down by almost 10%.

Prime steers at market fell by 0.8p/kg lw despite a slight drop in numbers, to average 186p/kg lw.

With cow slaughterings running some 20% ahead of last year in late January, the market is not short of processing beef.

As in many other farmgate commodity markets, traders are reluctant to commit to anything after the end of March in the absence of any details on the terms of trade with the EU and other countries.

There is plenty of beef in store, much of it processing beef, and this is overhanging the market. However, some expect demand could pick up next month in the run-up to 29 March, in anticipation of some customers planning to stockpile in preparation for a hard Brexit.

At Thirsk Farmers’ Auction Mart on 31 January, auctioneer Tony Thompson said heifers and young bulls were on average up 8p/kg on the week. However, because abattoirs were largely only looking for animals that would give them a 270-320kg carcass, anything heavier than 600kg liveweight would see a liveweight price penalty of roughly 10p/kg, he said.

Mr Thompson said although prospects did not look terribly exciting, there was steady demand and more good cattle could be sold.

With high cull cow numbers, there was the possibility that some farmers would not be able to send cows just when they expected to, warned Stuart Vile, southern manager at marketing group Meadow Quality livestock.

Some abattoirs were looking to reduce numbers but not prices for cows, he said in the group’s newsletter, so there could be queues for slaughtering.

Mr Vile also warned that there was a 20p-30p/kg deadweight price differential between cattle that did and did not meet supermarket weight specs.

The AHDB’s most recent forecast is for a slight drop in domestic production, with prime cattle slaughterings similar to 2018 levels, but with a fall in cull cow slaughterings.

Nevertheless, the high level of cow slaughtering in 2018 has resulted in a forecasted drop in the breeding herd size this year and a knock-on effect on production in late 2019 and through 2020.

Overall trade is expected to fall slightly as result of less export availability and a reduction in Irish production affecting imports, says the AHDB.