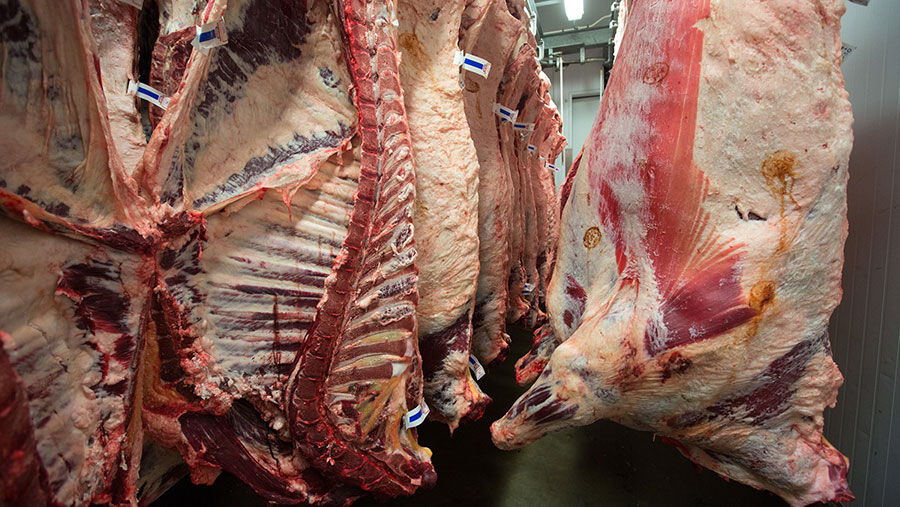 Beef producers outside the UK will be £120 a head better off than their British counterparts under no-deal Brexit plans, meat processors have warned.

In a joint statement, the British Meat Processors Association, the Northern Ireland Meat Exporters Association and the Scottish Association of Meat Wholesalers said the government’s no-deal plans would fail to protect British beef farmers from competition.

Global market beef prices, particularly in the steak sector, are about half of UK prices.

British farmers, producing to higher standards, are protected from this price gap by the EU common external tariff.

But this protection does not exist in the UK’s proposed temporary tariff schedule.

Instead, the government intends to hand global competitors tariff-free access for 230,000t of beef imports.

Across the four prime beef cuts alone – fillets, strip loins, rumps and ribeye – the import quota is worth £120 an animal to global competitors. This would displace domestic suppliers, particularly in the catering sector, the statement said.

A spokesman for the processors said: “Even when the quota is filled, the new lower UK tariff will still leave global competitors £56 a head better off than at present.

“The reality of the government’s tariff proposals is that our beef suppliers will face unsustainable competition from global rivals producing to different standards.”

Domestic prices will be further undermined if the UK market has to absorb the 100,000t of UK beef that is currently exported to the EU.

“This has serious implications for farmgate prices for UK producers based on the prime steak market alone – and that is before considering the impact on other beef cuts in what is an already depressed market,” the processors warned.

“The viability and sustainability of the UK beef industry is being put at huge risk. At the very least, producers will require urgent support payments to protect farming incomes.”