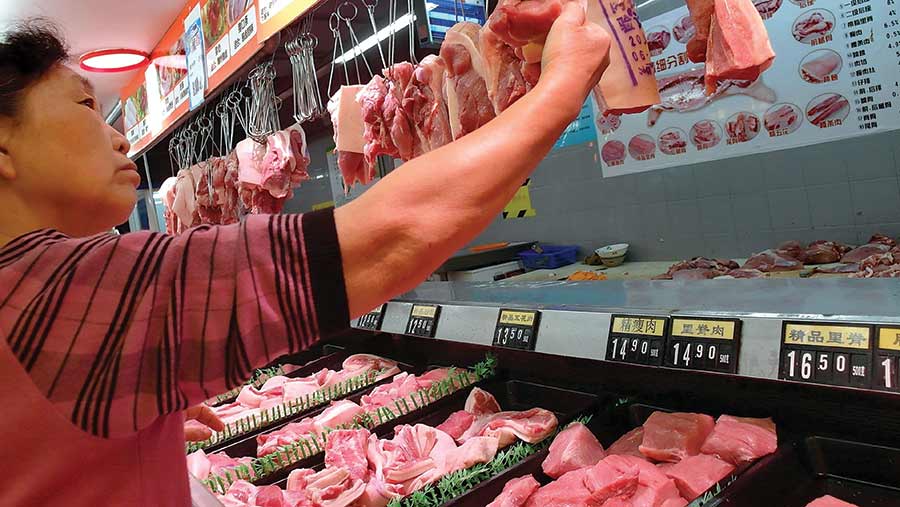 One of the biggest foreign markets for British pork has announced dramatic plans to halve its meat consumption.

This week the Chinese government revealed new healthy eating guidelines for its 1.3 billion population covering the next 10 years.

Meat consumption in China, where roughly half of the world’s pork is eaten, currently averages 63kg of meat a person a year. The new target aims for just 14-27kg.

Climate campaigners have hailed the move as a boost for efforts to cut greenhouse gas emissions, but the trade implications could be enormous.

China was the largest single market for UK pork exports from January to April, buying 13,582t or just under a fifth of the total.

The UK shipped 12,081 of pig offal to China in the same period, with the People’s Republic buying 42% of what we sent abroad.

The Chinese appetite for offal has meant a vital added-value opportunity for pork processors when margins are tight.

British exports to China have been racing upwards: pork shipments were up 95% on the year in April by volume, while offal was up 212%.

She said there were no signs of a drop-off.

“In the short term we cannot see it slowing,” Ms Campbell said. “They are not increasing production; there are a lot of environmental restrictions in place.”

“Even if they did cut their consumption by a small amount, it is still a country of well over a billion and they still do not have enough domestic production to satiate demand.”

Any potential knock to demand is far removed from current UK pig prices, which have continued to creep upwards.

Prices remain well down on last year, but the market seems to be rebalancing. Slaughter numbers were 5% down on the year.

AHDB Pork has also reported an emerging origin for pork shipments into Britain.

Much of the processed pork is sold to Polish shoppers in the UK, while most of the fresh and frozen is destined for secondary processing, AHDB reported.