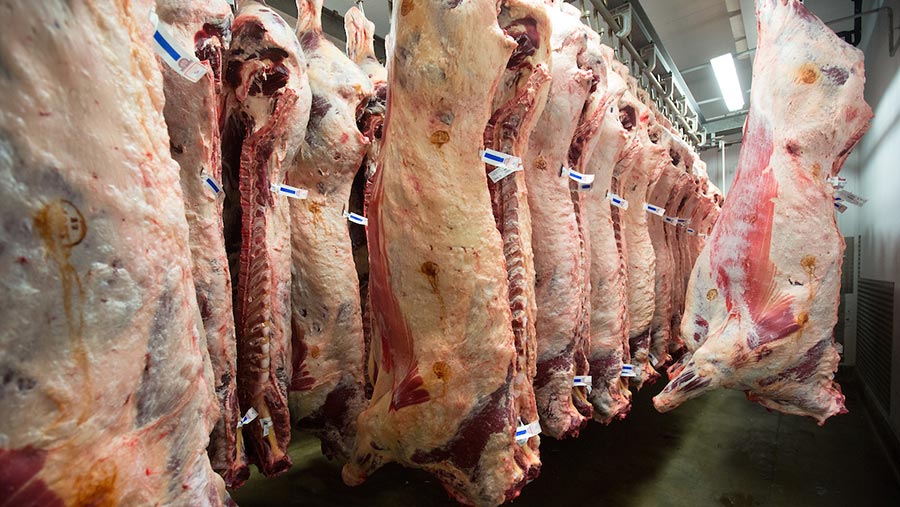 The devastating impact of African swine fever (ASF) on China’s pig herd may have knock-on benefits for beef and lamb as buyers look to alternative proteins to make up demand.

Since ASF was first discovered in a Chinese pig herd a year ago, losses have escalated.

Chinese government figures, released in late April, suggested that the national herd stood at 377 million pigs – down 42 million or 10.1% – in the first quarter of 2019.

Within the overall figure, the sow herd dropped by 21% year-on-year, damaging the future breeding and production capacity.

To replace the shortfall, the USDA estimates Chinese import levels will have to increase by 40% or 2.2m tonnes.

If the latter proves correct, up to 200 million pigs will be lost to ASF through infection, slaughter to control the disease and reduced breeding capacity.

Other proteins set to benefit

The AHDB has suggested China would cover most of this shortfall through imports, not just of pork but other proteins as well.

“Although beef and lamb are still a small proportion of overall protein consumption, there is potential for global markets to be supported by China,” said analyst Tom Forshaw.

Pigmeat consumption has already declined in China, primarily due to food safety concerns, despite ASF being harmless to humans, Mr Forshaw said.

If pork prices begin to rise in China due to a shortfall in supply, consumption could decline even further, he added.

While pigmeat consumption has been falling, demand for imported beef, and to a lesser extent lamb, has grown in China.

This could now increase, the AHDB believes.

“In the past, lost domestic pork production might have been replaced with imported pork,” said Mr Forshaw.

“However, even at conservative estimates, volumes needed to fill the gap are simply not available on the global market,” he said.

With declining consumption and a protein deficit, it is likely that imports for other proteins will increase throughout 2019 and beyond, Mr Forshaw predicted.

This is likely to come largely from chicken and fish, but beef and lamb are also set to experience increased demand.

A relatively tight supply situation in lamb could be further tightened by increased demand from China.

Although the cattle market is set to be a touch better supplied globally, a protein shortage in China still presents an opportunity to introduce more Chinese consumers to beef, he concluded.

AHDB estimates suggest that UK beef exports could be worth up to £250m in five years’ time.

However, China has not yet approved UK beef imports despite lifting its 20-year ban following the BSE crisis.

Chinese officials visited the UK last week to inspect traceability and safety protocols and the AHDB has said it is hopeful that commercial beef shipments will soon be given the green light.