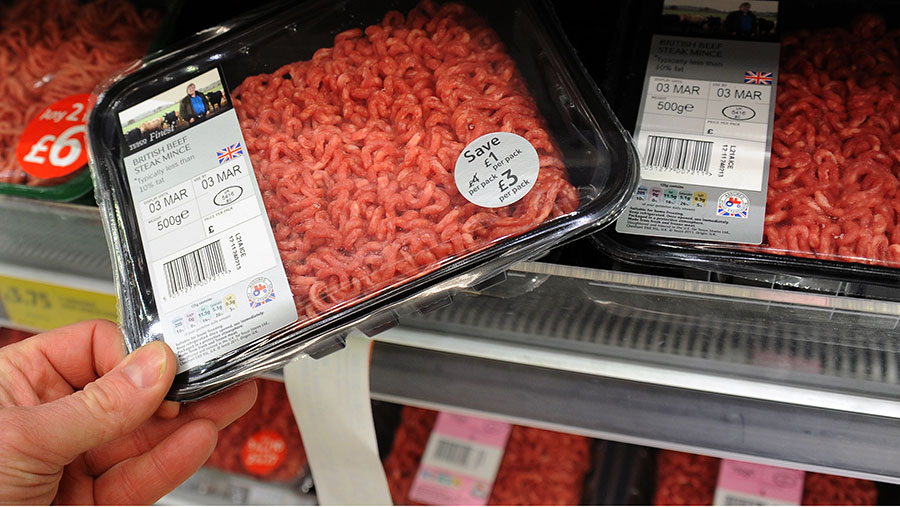 Soaring temperatures combined with the coronavirus lockdown ahead of Easter resulted in differing fortunes for meat and dairy products on the retail market.

Easter is traditionally a strong point in the year for roast meals, as family gatherings centre around the Sunday dinner table.

In contrast, beef mince sales have continued at a high level. This is in part due to the spell of hot weather, with many households producing burgers for outdoor grills and barbecues, the AHDB suggested.

During the week ending 12 April, volumes of lamb roasting joints sold, especially leg, were down 25% compared with the same period last year.

Shoulder volumes saw even greater losses and were down by more than one-third (36%) on figures for 2019.

The fall was attributed to the timing of the lockdown, reducing the opportunities for family gatherings and a roast lamb joint. Price was also a deterrent, said AHDB .

The AHDB pointed out that the current data week for 12 April 2020 covered the Easter period. However, the Easter break was a week later (21 April) in 2019.

The difference means year-on-year declines for lamb are likely to be more severe in next week’s data, it warned.

Temperatures in some parts of the UK during the week to 12 April were up 12C on the same period in 2019. This is likely to have driven the increase in volume sold of burger and grills for barbecues, the AHDB believed.

As a result, mince volumes were up 29% on 2019. However, despite the year-on-year difference, mince has not gained further share of the beef category since the coronavirus lockdown.

Roasting joints suffered the greatest drop off in retail volumes purchased – down 65% or about 1,000t compared with the same week in 2019.

The AHDB attributed the fall to a combination of hotter weather, fewer Easter gatherings and an average price increase of a third.

Volumes of bacon and sausages sold for the seven days up to 12 April were up 18% and 48%, respectively, compared with the same week last year.

Roasting joints, for the same reasons as in the beef and lamb categories, suffered significant losses.

Total pork roasting was down 63% year on year, with the fall given further impetus by higher prices. Recent gains for chops, during late March and into the first week of April, have now subsided.

Volumes of mince continue to grow and were up 14%.

The coronavirus lockdown may have had a positive effect on butter and cream sales in the same week, with year-on-year volumes up 37% and 59%, respectively.

AHDB analysts have suggested this upsurge could be down to a strong interest in home baking while people are forced to stay indoors.

Liquid milk volumes also performed strongly, with sales up by 24m litres – a rise of more than one-fifth (22%) on the same week last year.

Weekly volatility in demand has seen milk sales vary by as much as 24m litres a week, putting the supply chain under extreme pressure.