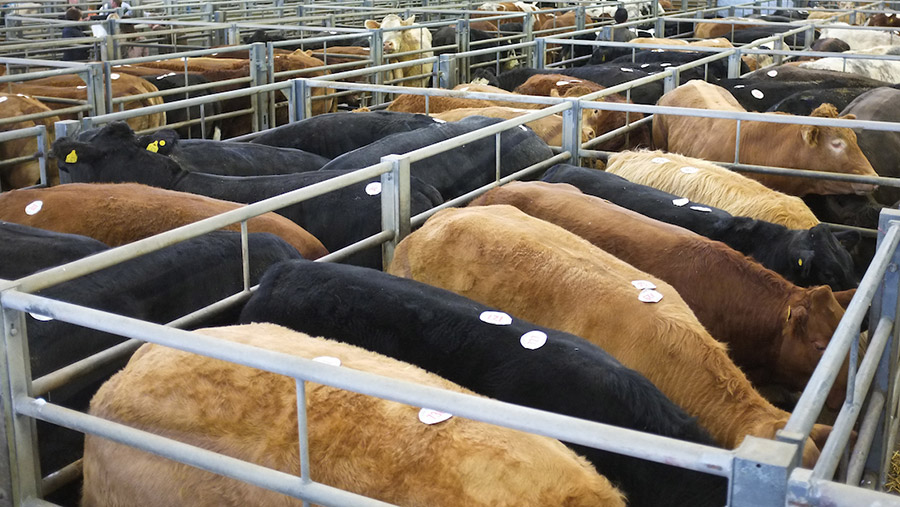 Auctioneer firms have suspended sales of fatstock and store cattle at three Welsh livestock marts for at least three weeks amid fears over coronavirus infection, sparking fears that others may follow.

JJ Morris’ marts at Whitland and Crymych will not operate until 18 April at the earliest, while Nock Deighton has cancelled its forthcoming marts at Newcastle Emlyn.

NFU Cymru’s livestock board chairman Wyn Evans described it as a “significant blow” and said the economic consequences for farmers would be severe if further closures follow.

“I am not criticising any businesses that take a decision to close marts, if they feel they need to do that to keep people safe,” said Mr Evans.

“But there is no denying how vital marts are for underpinning fatstock prices, particularly sheep.”

Farmers with store cattle to sell will also be worried, he added.

“We normally see a lot of movement of store cattle at this time of the year.

“With some marts closed, farmers and dealers will travel to marts that are trading, so the numbers of people at these will increase.”

But JJ Morris said it had taken the decision to cancel all sales to protect its staff and the farming community.

“We appreciate that marts are vital for keeping the wheels turning, but with sales of dairy cattle and breeding stock suspended for three weeks, we felt it was appropriate that we should no longer continue with our marts for now,” said Huw Evans, who runs Whitland.

Nock Deighton said it took the decision to cancel its markets at Newcastle Emlyn in part due to its town centre location.

In other parts of Britain, auctioneer firms are adhering to the LAA’s strict guidelines, including pre-registration of buyers, “drop and go” when stock are delivered, and 2m separation at all times.

LAA secretary Chris Dodds said public health was of primary importance, but believed that with these restrictions in place, marts could operate safely.

He admitted that the removal of breeding stock and dairy cattle from trading had potentially made it less cost effective for marts to operate, but a decision on whether to close marts completely was one that had to be taken by individual companies.

“Our members are doing everything in their power to make staff feel safe against what is a silent virus,” he said.

Mr Dodds added that some marts in the north of England, which operate “back-end” sales of prime sheep and cull ewes, had decided not run these as throughput would be halved since no sales of breeding stock were permitted.

Fatstock and store cattle sales were also suspended at some marts last week, principally because the lack of demand from export markets had stagnated the supply chain.

This resulted in a reduction in deadweight prices. But with most marts operating again this week, trade is predicted to pick up again.

Hereford Livestock Auctioneers, for example, had about 1,600 prime hoggets and store hoggets booked in for sale on Wednesday (1 April) and 600 cattle the following day.

Director Richard Hyde said it was vital that marts keep operating to sustain the food supply chain. “We need to keep the public fed and keep farm cashflows going; marts are fundamental to that.”

Across the Irish Sea

The Northern Ireland Livestock Auctioneers Association took the decision on 23 March to close all marts completely for two weeks.

Marts were also closed in the Republic of Ireland, though this week the government has allowed some limited trade to resume.

For calves, farmers are being allowed to make deliveries to mart, by appointment only, to meet specific purchase orders.

For older livestock, a weighing service for lots of cattle/sheep, by appointment, may be allowed, with the mart facilitating the transaction between a buyer and a seller.

These operations are only allowed where they are deemed essential, and steps must be taken to minimise the potential for contact between people.