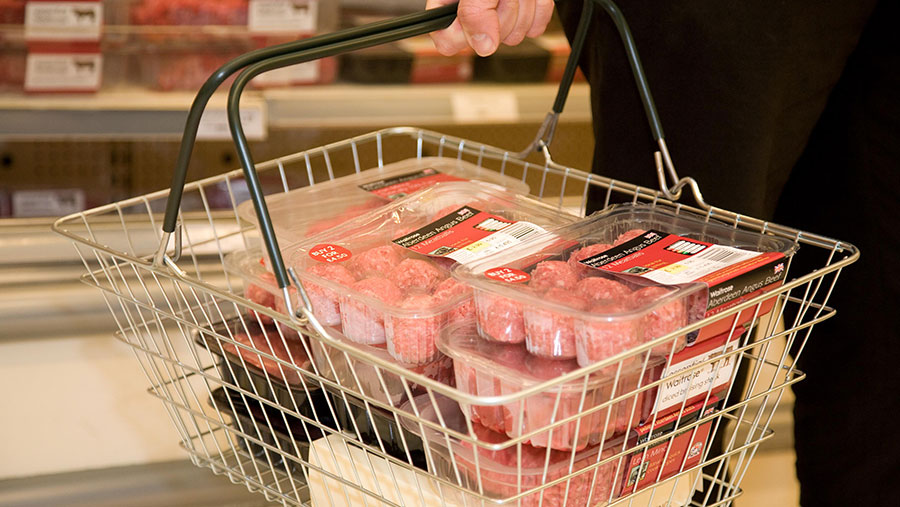 The cost-of-living crisis is expected to lead to more consumers cutting back on the amount of meat they buy.

Consumer insight research by AHDB predicts a downturn in retail sales of meat compared to last year as people tighten their belts.

Even a product such as mince – traditionally regarded as a budget-friendly option for home cooks – is now perceived as expensive to growing numbers of shoppers.

See also: Move to veggie food may have slowed

AHDB says there has already been a sharp increase in the number of consumers specifying cost as the main reason why they might cut back on eating meat.

There has also been a decline in the number of consumers who think meat is a “good price”.

Cost is now ranking neck and neck with health as the top driver of people choosing to reduce their meat consumption.

Data suggests that retail sales of lamb are down by 12% compared to pre-pandemic levels.

“Consumers may choose to opt for cheaper cuts, such as mince, that are easy to bulk out with cheaper vegetables or carbs, but AHDB’s consumer tracker is showing larger proportions of consumers are now perceiving mince as expensive [rising from 11% to 19% over the past 12 months],” she warned.

Demand for hindquarter cuts was also likely to drop further as inflationary pressures were likely to put a brake on the food service sector, she added.

According to an AHDB/You Gov consumer tracker, 36% of people are planning to eat out less than pre-pandemic and 77% of those say it is to save money.

Ms Stannard said when comparing numbers, it should be remembered that there was a period in 2021 when pandemic restrictions meant in-home eating was above average, so retail sales were higher than usual.

However, she expected to see a drop in year-on-year retail sales.

Looking forward, she said that retailers would need to look for ways to support consumers through the crisis.

Promotional strategies would need to be carefully devised to manage demand at peak periods, such as Christmas, while maintaining carcass balance.

“Consumers may need to revisit some of the more old-fashioned ways of making meat stretch further via creative use of leftovers and ensure they minimise food waste,” she added.