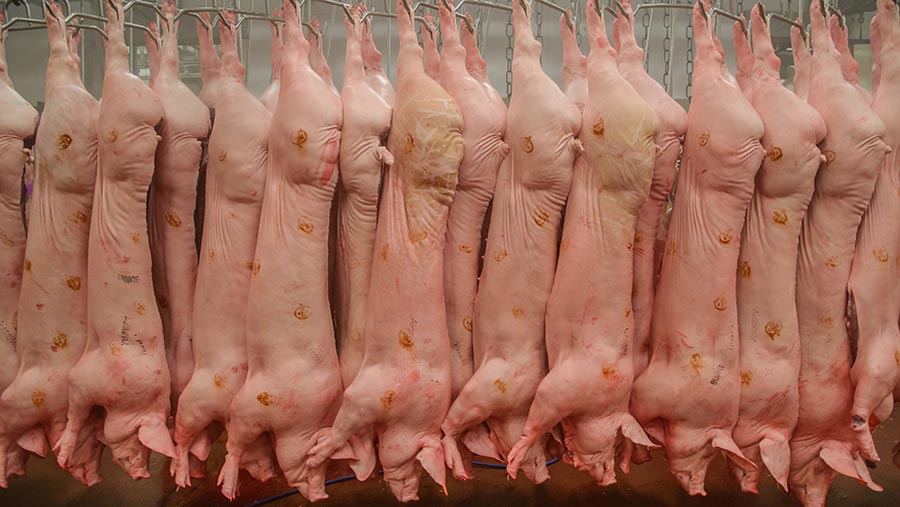 Declining pigmeat imports combined with export growth could offset rising production to create a relatively stable UK market in 2019, the AHDB has forecast.

The levy body’s latest Horizon report is an agri-market outlook, which says there has been a modest increase in the breeding herd, evidenced partly by rising compound sow feed production.

The increase had been bolstered further by expansion in integrated outdoor herds, the report said.

The general background of improving sow performance could mean clean pig slaughterings are likely to rise again next year, albeit at a slightly slower rate than in 2018.

See also: Diversification advice – So you want to offer self-storage on farm?

However, there are limitations, the AHDB warned. Infertility during the hot weather will reduce production early in 2019, while carcass weights are expected to remain at or below year-earlier levels until next summer, suppressed by higher feed costs.

The extra supplies of UK pigmeat will put pressure on prices unless there is a rise in demand, the report said. However, retail pigmeat sales remain subdued with the higher-value fresh pork segment in decline.

Pigmeat imports have declined in 2018, particularly in the early months when UK production growth was strong.

The AHDB suggested this is likely to continue as UK production expands, but there may be some increase in imports ahead of Brexit as buyers stockpile product.

Export levels next year will depend to some extent on demand from China, where domestic production has been hit by African swine fever. It will also hang on the outcome of Brexit and maintained access to the EU.

With all of these factors taken into account, the AHDB forecasted that the domestic market would remain broadly stable again in 2019, with exports expected to rise and imports to fall.

The caveat is that global pork production is expected to be higher next year and could yet put prices under pressure unless demand can be stimulated.

In a bid to do that the AHDB began the latest phase of its £2.5m Pick Pork TV advertising campaign in September.

Previous campaigning under the slogan delivered extra revenue of £13.2m with £6.43 of retail sales generated for each £1 of marketing media spend.

The full Horizon report – Forecast: Agri-market outlook – can be downloaded from the AHDB website.

Scotland will launch its biggest-ever pork marketing campaign in the new year backed by £125,000 from the Scottish government.

The grant has been awarded to Quality Meat Scotland (QMS) to support its Go Places with Pork campaign.

The initiative will launch on 21 January and promote pork as a low-cost, healthy and easy-to-cook ingredient.

The campaign will include TV, radio, print and billboard advertising as well as a major digital and social media promotional push.

QMS said the initiative tied in with the strategic objectives for pork marketing set out in the Scottish Pig Industry Strategy launched at the Royal Highland Show this year.

This strategy also includes an ambition for the pork industry in Scotland to double its value by 2030, a target in line with the Scotland Food & Drink Partnership’s Ambition 2030 target to double food and drink turnover in Scotland.