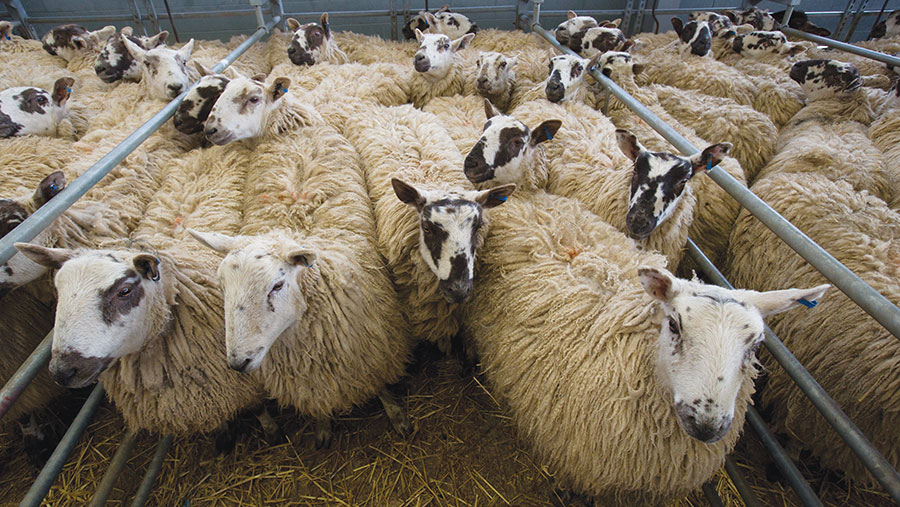 Rocketing prime lamb prices suggest that the amount retailers are able to import is sharply down on last year, amid a global shortage of the meat.

Some processors began offering deadweight prices in excess of 500p/kg this week, while the AHDB said the UK average SQQ liveweight price reached 240.09p/kg on Tuesday (11 January) – a rise of almost 6p/kg on the week.

With the Chinese rapidly accelerating the pace of red meat imports to replace pork from their African swine fever-stricken herd, there will be less meat available to come to Europe from New Zealand this spring, said AHDB analyst Rebecca Oborne.

See also: 8 ways to prepare for a busy lambing season

Deadweight prices have also risen, with farmers reporting that Randall Parker Foods is offering 500p/kg this week, while Dunbia Llanybydder’s 13 February prices are 510p/kg for British, 520p/kg for Welsh and 540p/kg for organic lambs.

Auctioneers at Welshpool Livestock Market reported on Monday that a sale of 2,991 old-season lambs averaged 245.6p/kg, with prices peaking at 287p/kg or £126 a head. Watch auctioneer Jonathan Evans in action below:

Some forward-bought New Zealand lamb will be on UK shelves this Easter, but it remains to be seen if product traded on the spot market comes here or goes to other destinations, she said.

“New Zealand farmgate prices are continuing at a high level.

“Continued strong demand and prices in China, and global supply tightening again all point towards one conclusion – a reduction in New Zealand lamb coming to the UK.”

Exports from the southern hemisphere have been compounded by last month’s wildfires in Australia, which followed an extended drought, both of which have had an effect on production volumes.

The country is not a major exporter to the UK, but is a key supplier to China, Asia and the US – markets which New Zealand will be looking to supply, instead of shipping as much volume to Europe, she said.

The latest increases build on a strong start to 2020 for lamb prices after they opened at the highest level for more than 10 years, and now stand in some markets at close to 50p/kg higher than a year ago.

UK prices are also being helped by strong European demand, as British supplies compensate for lower amounts coming from New Zealand, which exported 16% less lamb to France between January and November 2019 than the previous year.

UK exports to France rose 8% in the same period, according to the most recent HMRC data.

The values will be a relief to specialist store lamb buyers who paid very high prices in the autumn in the expectation of this pinch point.

Rugby Farmers Market auctioneer Tom Wrench said farmers were enjoying a phenomenal trade, but he cautioned that smaller processors and exporters were seeing their margin cut to almost nothing.

“Supermarket buyers are bidding a wonderful price, but I worry the lamb might be sold as a loss leader,” he said.

With such rapid price increases after Christmas in two of the past three years, he said it was likely that more farmers will look to shift to a later lambing system to move more of their sales away from the autumn supply glut.

“The point about this year is the men that lambed them are having a bit of it, but before it was all the store producers,” he said.

GB estimated slaughtering was 222,400 head in the week ended 1 February – down 9,000 on the previous week and the third weekly fall in succession.

However this is still up significantly (+28,600 head) on the same week a year earlier.

December GB sheepmeat production was 26,700t, down 4% on the month and up 0.5% compared with a year earlier.