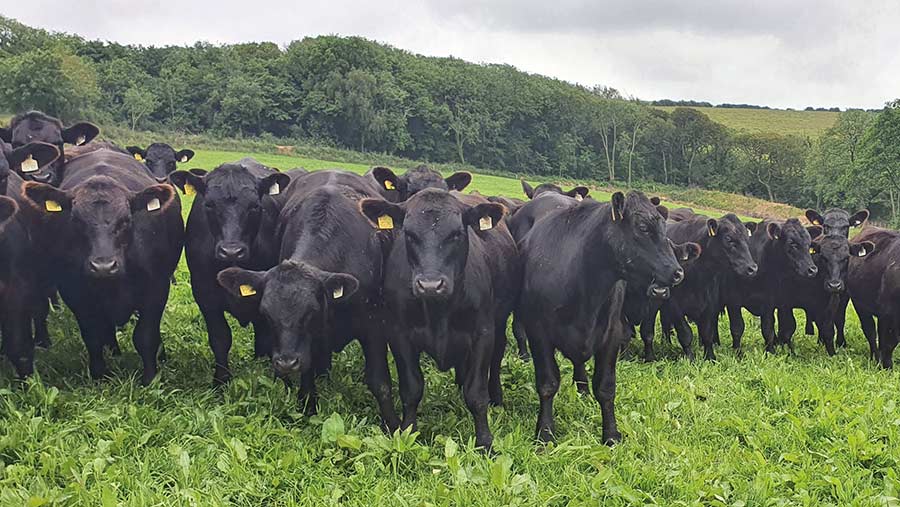 A bid to improve the eating quality, production and environmental credentials of British beef has been launched by a group of West Country farmers.

The Good Beef Index (GBI) aims to succeed existing carcass-grading systems with a structured and more detailed indication of quality and assurance.

“The market has changed since the Europ system was introduced,” says Mr Nancekivell. “Consumers want to know more about beef, including how it is produced, its environmental credentials and a reliable indication of its eating quality.”

The Europ system provides a way for buyers to price beef only against an estimation of fat class and conformation.

While assurance schemes give an indication of how a farm is run, they fall short of providing detailed information directly to the consumer.

As a result, farmers get paid an average price for premium beef while consumers pay a premium price for average beef, Mr Nancekivell says.

The aim of the GBI is to take the next step on from assurance to an evidence-backed scheme that combines assessments on all aspects of production and eating quality. A direct link to the information will be displayed to consumers via a QR code on retail packs.

How the Good Beef Index works

Carcass quality is estimated using ultrasound scanners to measure intramuscular fat, backfat and eye muscle area. The fat measurements are directly linked to eating quality, while the eye muscle area provides a strong indication of killing-out percentage to the buyer.

Carbon emissions scores are calculated by the index according to the production system used. For example, an inefficient system that uses a lot of concentrate and inorganic fertiliser, or fails to adopt measures to curb emissions, will only score low marks.

These will be associated with the rearing system in place – dairy breeds score lower, while beef breeds with high-health status will get closer to the maximum.

Each of the three above areas has a potential maximum score of 40, to give a combined total of 120 as the highest possible total.

Points to beef from a cross-bred cow, suckled until weaning and grazed outdoors on grass

How the system works on-farm

The system is being rolled out by the three founding farms in the West Country to 10 early adopters, known as pioneer farms.

One of the founding farms is Jonathan Chapman’s Hele Barton Farm, near Bude, Cornwall. The 223ha all-grass farm supports a herd of 200 pedigree Angus sucklers, with about 550 head in total.

Mr Chapman helped develop the index after becoming frustrated at the lack of recognition and reward for beef produced from his high-quality herd.

“We are producing 100% Angus beef from an all-grass farm with huge benefits for the environment in terms of carbon capture. But our beef sits on the shop shelf next to a packet of meat from a dairy-bred animal, reared on concentrate, that’s never been outside,” Mr Chapman says. 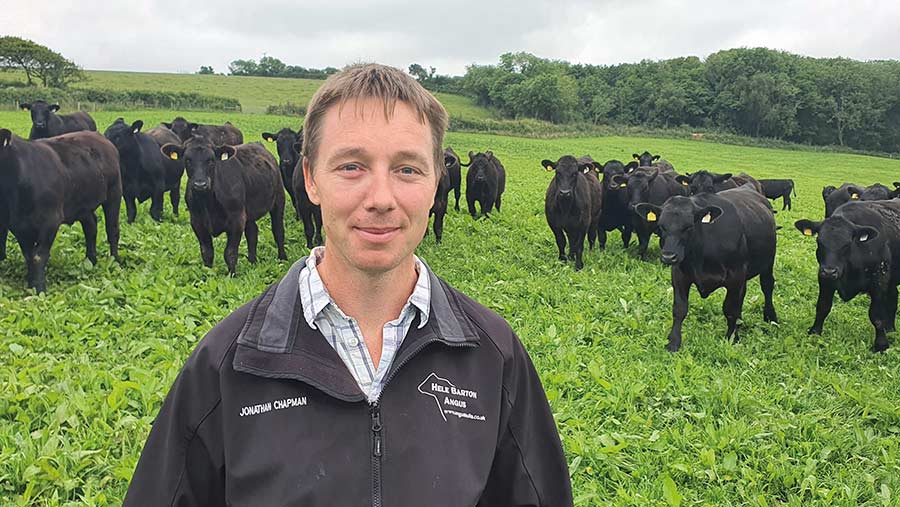 Prices are scant reward for a wet hill farm that is only suited to beef production, he says. “We know the end point of the supply chain is critical in securing the maximum price and the farm’s long-term future. But while we have a strong story to tell, the Europ system does nothing to sell it.”

Mr Chapman’s role in setting up the GBI is pivotal due to his background as a farm vet. Working in a large animal practice before returning to the family farm gave him detailed experience in ultrasound scanning.

He heads up the scanning development side of the GBI initiative, which is key in predicting eating quality. He visits the foundation farms and pioneer units to scan cattle up to six months ahead of slaughter.

The frequency may increase as the scheme develops and more scanners are introduced, he suggests. It takes three minutes to scan each animal, but it can be done during a weighing session to avoid doubling up on handling.

Scanning provides an accurate picture of the conformation, eye muscle area, fat depth and intramuscular fat. Buyers, butchers and processors then have detailed information on the potential yield and value of the carcass.

The farmer can also use the information gained to fine-tune the fat class ahead of finishing. Data is collected and stored on a laptop during the scanning and then logged to the individual animal. The scanning result is the major factor in the eating quality score.

The ultrasound scanner is the only one of its kind in Britain and data is sent for analysis to an American lab. However, British breed societies use an independent standard based on an Australian system that has been in place for 20-30 years, he says.

“The American system provides a more accurate measurement, so we believe it gives a better insight into the carcass quality. We realise it might challenge established thinking, but we hope to work closely with breed societies, given that we have a common aim,” says Mr Chapman.

In addition to the scanning measurements, herds will achieve higher eating quality scores if they are grass-fed. Research shows grass-fed beef has a better nutrient profile, with raised levels of vitamins A and E, omega-3 and important minerals, offering known health benefits for which there is a potential consumer premium.

Beef producers will log in to a web app to add details of their farm and generate the production score. Adding reliable figures here is largely based on trust, but scanning visits provide an opportunity for the GBI team to inspect the unit to ensure the producer input matches the farm’s profile.

About half the points contributing to the production score are for herd-based factors, Mr Chapman says.

A grass-fed suckler cow system will score well. In this case, the manager will estimate what proportion of the ration is from grazing and enter a percentage value.

How many days the herd spends outdoors each year can be logged and extra points will be scored if the farm is Pasture For Life accredited, which gives certified evidence of finishing on grass.

Birthweights and dam size are also recorded – the GBI score is better if the dam is not too large, as smaller cows are able to rear calves more efficiently with less feed consumed for maintenance.

Better genetics will score more highly, again due to their efficiency and carcass quality. Estimated breeding values are taken into account in the index, for efficiency of growth, but also elements such as ease of calving from a welfare viewpoint.

Health and welfare is another component under the production score. Disease and the use of antibiotics and other medicines are logged, with membership of health schemes such as bovine viral diarrhoea initiatives adding to the score.

A grass-fed system will achieve a higher score than an indoor set-up that feeds concentrate, with a higher carbon footprint.

Any demonstrable efforts to reduce emissions and cut pollution risks can also be added to the farm’s profile.

Details from the farm are entered into a web-based app that can be accessed by meat buyers and consumers via a QR code on retail packs.

The GBI team intends to promote the system to other beef herds and has begun working with local meat processors. It also held positive discussions with abattoirs and processors further afield.

Crucial to the GBI is the treatment after the animal leaves the farm, with stress before slaughter, and hanging and carcass treatment known factors that affect meat quality, Mr Chapman says.

“We intend to work with partner processors to ensure that the GBI is extended through the chain to the point of sale,” he says.

One of the local processors involved is Devon-based abattoir owner and butcher, Tom Lang.

The first GBI animals that have come through the system have been calm, well-finished and excellent quality, with good muscling and intramuscular fat levels, Mr Lang reports.

This indicates fantastic eating quality and will warrant a premium at top-end restaurants or direct sales, he suggests. Mr Lang has vacuum-packed the cuts and applied the QR code, sending them back to the farms to be marketed.