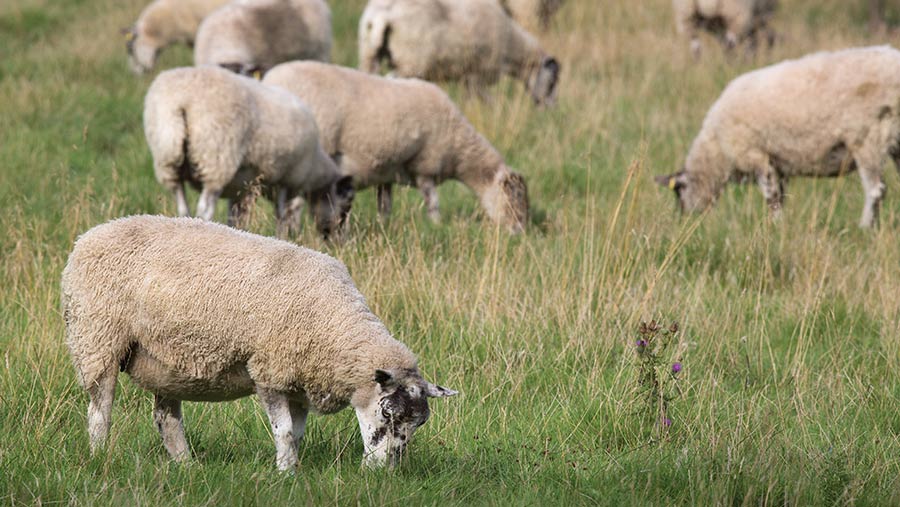 Liveweight lamb prices have seen a sharp drop across Great Britain in the past week, but experts remain optimistic about the market and expect them to rally.

Although values have fallen in what continues to be an unpredictable market, they are still higher than the same week in 2020 and are significantly above the five-year average.

Meanwhile, the cull ewe trade has been highlighted by auctioneers as being particularly strong, and both cull ewe and deadweight lamb prices are standing firm.

See also: How to control gastrointestinal parasites in sheep and cattle

Exeter-based auctioneer Russell Steer of Kivells said though he had seen new-season lamb prices drop from 246p/kg the previous week to 222p/kg on Monday 2 August, values were still well above what was usual for this time of year.

He put the fall down to a matter of oversupply, particularly with store lamb sales drawing big numbers and the better animals going to kill, with slightly slower sales both at home and on the continent.

“Prime lamb prices in mid-June dropped like a stone to lower than this level and it bounced back up fairly well, so I think it will probably do that again,” said Mr Steer.

“We’re in unprecedented waters, really – we’ve never seen these prices at this time of the year before. No one had ever seen them go dearer in June and nobody really knows what’s going to happen.

“Values rose in January and February and got dearer in the spring. There was good trade through the summer, and every week of those high prices gave farmers more confidence that maybe we have entered a new era of prices.”

The peak trade expected in the lead-up to the Muslim festival of Eid in July continued during the celebration and for about 10 days longer than anyone anticipated, he said.

Gordon McWhirter, Meadow Quality livestock marketing specialist, said lamb prices were dropping 10p/kg a day in some cases, but it was difficult to say why.

“Lambs have seen an amazing trade up to now and we’re not in a normal year, so it’s difficult to pinpoint and know what’s going to happen,” he said.

“In the past we’ve seen it bounce back; I can see that happening again because there are lower numbers about and demand is steady. It just depends on what lambs come forward in the next month or so.”

One factor that could affect prices to be aware of is that abattoirs are struggling for staff, only able to process a certain number of animals a day and looking to cover their overheads, he said.

However, cull ewe prices remain strong this week and the store market could be a supporting element.

“There’s definitely big demand for store lambs,” said Mr McWhirter. “The market is changing and there is more demand for sheepmeat in the winter months than there was, say, 10 years ago.”

On the deadweight front, prices continued to firm. In the week ending 31 July, the GB average new-season lamb SQQ lifted by 5p to average 565.5p/kg.