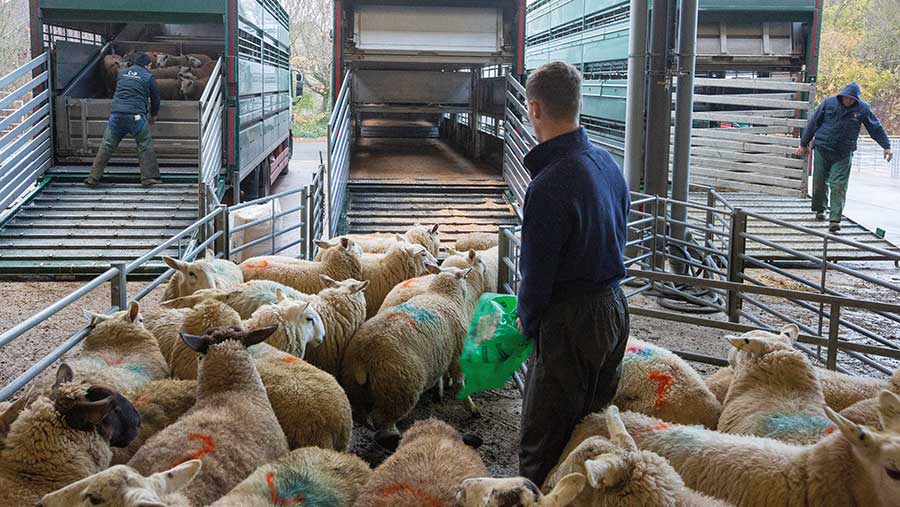 Tight supply, a tariff-free EU deal and limited imports mean lamb prices should stay high. However, there are warnings of possible volatility.

Many producers sold lambs in the run-up to Christmas and New Year’s Day, due partly to fears of a hard Brexit and continued wet weather, which was making finishing lambs a challenge, say auctioneers.

In the week ending Tuesday 12 January, markets saw the SQQ average jump 19.5p/kg to average 262.52p/kg liveweight. This was on a throughput of just over 75,000 head, itself a 99% rise on the previous week, which also saw a substantial price increase.

Imports and exports down

Charlie Reeve, AHDB livestock analyst, said supply was looking fairly tight and likely to remain so, with the number of lambs coming forward trending down in recent months.

“Carryover is probably similar to last year, although possibly slightly smaller, given 2020 ewe slaughter and the need to retain more ewe lambs,” Mr Reeve said. “Total slaughterings were estimated to be down about 2.2% during the whole of 2020 compared with the previous year.”

The AHDB’s most recent report (December 2020) shows both cumulative imports and exports reduced in volume for January to October last year.

Total imports were down 6% at 49,100t, mainly due to falling imports from Ireland.

Effects of lockdown on lamb

It remains to be seen how the third lockdown will affect the sheep sector, especially in the hospitality industry, which tends to favour larger lambs.

AHDB analysis during the first lockdown in March 2020 reported 15% of lamb is eaten outside the home.

With takeaways available and Indian cuisine a popular option for home delivery, lamb kebabs and curries are still very much on the menu.

In addition, retail sales show a rise in lamb consumption for home cooking, with spending on lamb up 18.3% year on year in the 12 weeks to 29 November 2020 to £217m, according to the AHDB.

Jonny Williams, joint operations director at Scottish livestock marketing co-operative Farm Stock, said trade is very bullish, with supply tight and demand buoyant, from both home and export buyers. He expects it to remain so, at least in the short term.

“It will be interesting to see if domestic orders remain as strong once we get into February, as these prices may be unsustainable for some,” Mr Williams said. “With the trade as high as it is, and with a lot of global uncertainty, staff issues and Covid, I think we could see sharp rises and falls, so expect volatility.”

In terms of Brexit, there is no doubt that exporters are facing extra paperwork, and there are a lot of extra veterinary checks, which someone in the supply chain has to pay for, he said.

Richard Hyde, an auctioneer at Hereford Market, is in no doubt prices will remain high, with a lot of producers having sold early in fear of a hard Brexit, and many tending to finish new lambs in March at the earliest.

“We could have a hungry gap now for what’s left of January and February,” Mr Hyde said. “The sheep world has been very fortunate during the pandemic, seeing higher prices in 2020 than in living memory at various times of the year, especially in the autumn.”

Time to cash in?

The main question is whether finishers with lambs on roots will cash in lambs earlier for £120 a head, or wait in the hope of hitting £140 a head, he said.

“Had it been a typical Midlands entry of Texels and Charollais Mules, I think trade would have been up to 290p/kg, which would equate to more than £6/kg deadweight,” Mr Wrench said.

Many lambs had effectively increased in value almost as high as the tariff would have been, he said, but exporters still wanted lambs.

“A lamb that was worth £90 before Christmas is worth about 40% more now, so it’s effectively had the value of a tariff put on it,” he said.

Rizvan Khalid, managing director of exporter Euro Quality Lambs, said demand from the EU was choppy, due to the effects of the pandemic – particularly on the catering sector – and businesses trying to get used to new processes.

“What was taking 15 minutes once the load was complete is now taking three hours, and the same checks at the Calais border have taken a further six hours before the product can go on to the customer,” he said.

“We’re still refining our processes and…are having to build in independent checks at every stage because one wrong digit on the paperwork can result in the load being rejected or delayed.”