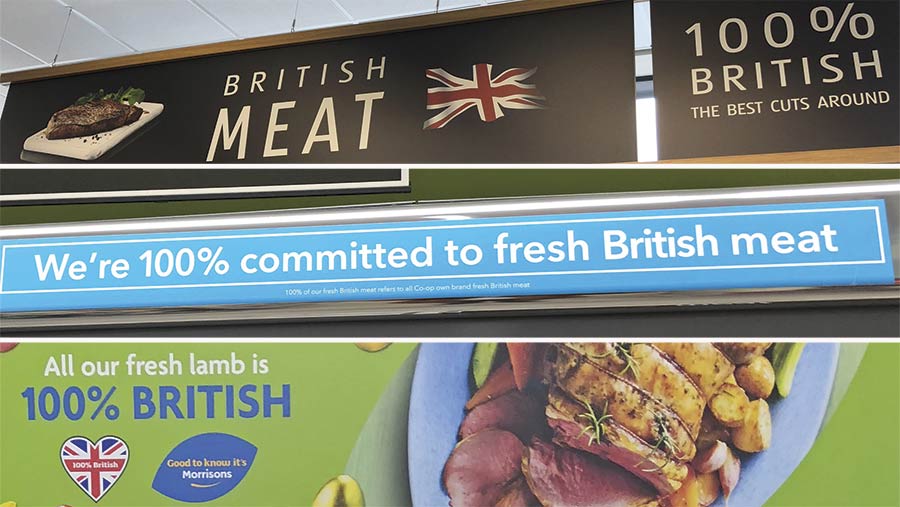 A Farmers Weekly survey revealed some supermarkets are stocking more New Zealand lamb products than British ones at this time of year, despite soaring UK slaughterings.

The Farmers Weekly Lamb Watch survey examined fresh meat and ready meal offerings from nine of the UK’s main retailers. It did not include fresh meat service counters.

Waitrose, which has 352 stores and prides itself on its supplier base of 450 UK farmers, had only New Zealand lamb on the self-service shelves in the two stores inspected on Tuesday 19 March.

In addition, when searching for lamb online, eight of the first 10 items on the retailer’s website were from New Zealand, despite 20 British products being available.

A spokesperson for Waitrose said over the past year, 72% of the lamb sold in Waitrose was British and that only UK lamb was on offer from May until late January.

The chain has just over 5% of the grocery market overall, but 10% of the lamb market and the lamb sold through its service counters is 100% British year-round.

It also sells British organic pre-pack lamb year-round in 100 branches and is extending this to more stores.

Waitrose’s failure to commit to sourcing British lamb year-round has been thrown into the spotlight given that rivals Co-op, Aldi and Morrisons have trumpeted their ability to offer the product 365 days/year.

British all year round

National Sheep Association chief executive Phil Stocker said: “If Waitrose wanted to stock British lamb all year round they could.

“We have the landscape, climate and different markets to have a quality lamb product available all year round.”

He acknowledged that the taste of lamb changes through the season, becoming a very different-tasting product at 14 months old than it was at 14 weeks old, but said this did not mean it had lost any quality.

“Waitrose talks about seasonality in other products,” he said. “But it is not doing it with lamb.

“If you take their position to the extreme, we would be driven to a more export-reliant market.”

The survey offered a mixed picture of other retailers, with high street stalwart Marks and Spencer only offering just over one-third of their fresh lamb from British farmers.

Spot checks at two stores also revealed only just over half of the fresh lamb was British at supermarket giant Sainsbury’s, which has more than 600 supermarkets and 800 convenience stores nationwide.

The findings come as British lamb producers are enjoying a vintage production year, with the AHDB crediting a potentially record-breaking lamb-rear rate, allowing throughput at markets to surge ahead of 2017.

There has been an average of 12% more lambs at livestock markets each week in 2018 than the previous year, but many of these are being exported rather than ending up on domestic supermarket shelves due to retailers’ long-term commitments.

Mr Stocker said this meant that the UK product often ended up being the balancer for the imported product rather than imports compensating for any UK shortfall.

However, he said that sheep farmers had much to be cheerful about as they head towards rearing and selling next seasons product, with recent Brexit transition deal ensuring frictionless trade with the EU until the end of 2020.

The Farmers Weekly Lamb Watch survey examined fresh meat and ready meal offerings from nine of the UK’s main supermarket retailers and did not include fresh meat counters.

What the retailers said

All of Aldi’s core range of fresh meat – including lamb – is 100% British all year round and only one other supermarket can match this position.

We stock a limited range of chilled lamb-based ready meals and three of these contain lamb from New Zealand. The country of origin is clearly labelled on the packaging.

We are committed to sourcing British products first and only stock lamb from elsewhere to ensure availability for our customers.

All of our products are clearly labelled so our customers can make an informed decision when buying their meat.

Over the past 12 months, 81% of our UK fresh lamb offering was British, with the other 19% all coming from New Zealand.

Across the same period, 94% of our lamb chilled ready meals contained solely UK lamb, with 6% coming from New Zealand.

As part of its commitment to supporting British farming and food, in May 2017, the Co-op switched to selling 100% fresh British lamb all year round.

This formed part of the Co-op’s plan to invest £2.5bn into sourcing British meat, dairy and fresh produce over the next three years. By 30 April 2018, 12 months on from the switch, we are proud to say that 100% of our lamb supply will be British.

We are committed to supporting and championing British farmers and producers, and are proud to source 70% of our core product range from British suppliers.

We endeavour to source fresh British lamb when in season as far as availability allows, and are pleased to sell 100% Welsh lamb in our stores in Wales all year round, with Scotch lamb also available throughout the year in our Scottish stores.

We source all of our fresh lamb from British farmers between July and December, however due to seasonal availability and in order to meet our volume requirements and strict quality specifications, we stock both British and New Zealand lamb between January and June.

Overall, almost 80% of our total fresh lamb sales over the past 12 months were British lamb.

We do offer customers a UK lamb option all year round through our speciality lamb range which changes throughout the year – Swaledale, Cotswold, Salt Marsh and Borders.

Outside of the UK the only country we source from is New Zealand – just over 20%.

Over the past 12 months, 15% of the lamb in our ready meals was British. The country of origin is clearly labelled on pack.

Outside of the UK the only country we source from is New Zealand (85%).

Throughout the UK season we are proud to source the best-quality, in-season British lamb.

When the season comes to an end, we supplement the range with lamb from New Zealand to ensure we offer customers the best-quality product.

We continue to work with our M&S Select Farm producers to further extend the UK season and have new-season lamb as early as possible.

For the past 12 months, 95.3% of our fresh lamb offering was British. The other 4.7% has been Australian .However, since May 2017 we have only sourced and sold fresh British lamb.

Morrisons has 450 chilled ready meals of which eight contain lamb – and this may come from the UK or abroad.

We now source and sell only fresh British lamb all year round.

Our pre-packed range is 100% British during the main season, and our meat counter lamb and Taste the Difference and organic ranges are British year round.

We source British for the rest of our fresh and ready meal ranges as much as we possibly can. Where volumes are lower in the off-season between January to June we also offer New Zealand lamb to meet customer demand.

We are extremely proud to back British lamb farmers and were the first retailer to introduce a cost-of-production model through our Tesco Sustainable Lamb Group.

Over the past year, we’ve further increased the number of British lamb products we offer and we always offer 100% British lamb on our counters and in our organic and Finest ranges.

By selling British and New Zealand lamb we can offer our customers quality, availability and good value all year round.

Over the past year, 72% of the fresh lamb sold in Waitrose was British. For background, Waitrose has just over 5% of the grocery market overall, but 10% of the lamb market.

The lamb we offer on our service counters is 100% British year round. In prepack, we offer 100% British lamb from late May to late January (having extended the British season by six weeks over recent years).

The non-UK ingredient lamb in our ready meals is sourced from New Zealand.

We don’t buy lamb on the open market, sourcing instead from 450 lamb producers in Wales, the South West and Northumberland.

The majority of our farmers prefer to raise their lambs on grass and fodder and are supportive of our approach; i.e. taking their lambs between May and January.

To enable us to offer British lamb year round on our service counters, we do source from specialists from the South West and Northumberland but, again, not through the open market.

We want to make it clear that we sell British organic pre-pack lamb year round in 100 branches and growing.

Of the nine major retailers surveyed, only the Co-op and Morrisons were found to stock half or more of their lamb ready meals with UK lamb.

Aldi, Asda, Lidl and Marks & Spencer were found to either have no British lamb in ready meal sections or had ambiguous packaging that listed up to four potential countries of origin for the meat.

Packaging stating lamb could come from either Ireland, Australia, New Zealand or the UK is an “appalling process”, according to Phil Stocker, NSA chief executive.

“I think it’s shocking. It does not contribute towards the transparency and trust the consumer wants.”

Mr Stocker also pointed out that retailers also never give a percentage to show how often lamb comes from each country.

“They may say there is a consumer out there that this caters for, but lamb is a high-value, premium product that we have to build a high-value story around.”

Sainsbury’s, Tesco and Waitrose were found to have just 39%, 22% and 11%, respectively, of lamb ready meals clearly labelled as containing British meat.

Supermarkets are probably committing to buy quotas ahead of time and can quickly turn around these imported cuts into these ready meals, Mr Stocker said.

“Profit margins on ready meals are really quite high, so it might not be much lower value than selling as a premium cut.”

He added, “NZ lamb is in ready meals simply because they can get away with it.”