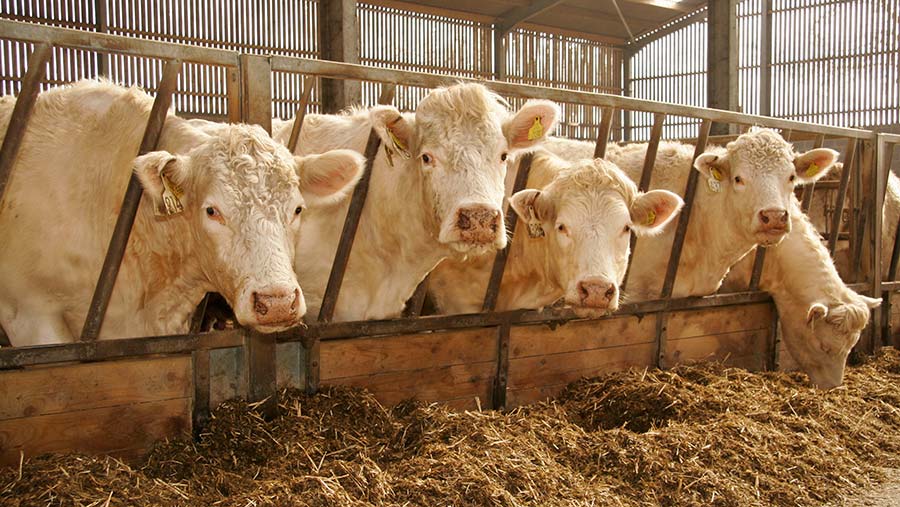 Lower carcass weights and limited cow throughputs are pushing up beef cattle prices across the country, with further improvements expected.

This is against a backdrop of increasing consumers demand for beef, with fresh and frozen retail consumption up 3.4% year on year in the 12 weeks to 28 March, driven by shopper interest in convenient cuts such as frying steaks (up 21%) and chilled ready meals (up 16%).

Young bulls were 1.2kg and 3.1kg lighter in February and March, respectively, compared with the same months last year, according to AHDB data.

A tighter supply of cows compared with last year – when dairy producers were culling their herds – is also affecting suppliers, said Mr Wyatt. GB cull cow numbers at auctions were down nearly 12% in the week to 22 April to 1,999 head.

Scottish prices have also been lending support to the UK average, said Mr Wyatt, with a backlog of cattle booked into abattoirs now easing.

“Everything is selling well across the board,” he said. With trade so strong, even non-farm-assured and foreign cows are selling well.

As finished cattle are traditionally in short supply in May, Mr Venner said he did not expect supply to increase.

However, referring to consumer demand, Mr Venner warned: “We’re in a bit of a post-[EU referendum] honeymoon period. The weak pound is encouraging sales of home-grown beef as well as exports – and we’re still getting [farm] payments.”

Clive Mahony, ruminant marketing specialist at livestock dealer Meadow Quality, near Birmingham, reported on Monday that average prices had firmed about 3p/kg on the week.

Carcass weights are about 5% lighter year on year, he wrote in his market report. “This means we need 5% more cattle to be in the same place.”

Meanwhile, he said the cow trade was “fantastic against a shortage of supplies”, with an expectation that prices would continue to hold over the coming weeks. All types of store cattle are also seeing strong demand.

A shortage of organic beef cattle is also driving the trade, with grass cattle not available for another two months and prices already up 5-8p/kg depending on quality.

Analysts and auctioneers said they expected prices to continue to improve as production fell further.

Lower supply not all good news

“While we all know the extent to which supplies are under pressure, it was still shocking to face the reality of last month’s Scottish government survey report that cattle numbers in Scotland are now at their lowest since 1950,” he said.

“Whatever else comes out of Brexit, the government must deliver a production platform that will encourage farmers to start building numbers again.

“As numbers fall, so processing plants come under unit cost pressures, businesses merge and abattoirs close. We have seen it before and unless the numbers decline is halted, we will see it again and, frankly, waiting two more years before seeking a solution is not the answer.”