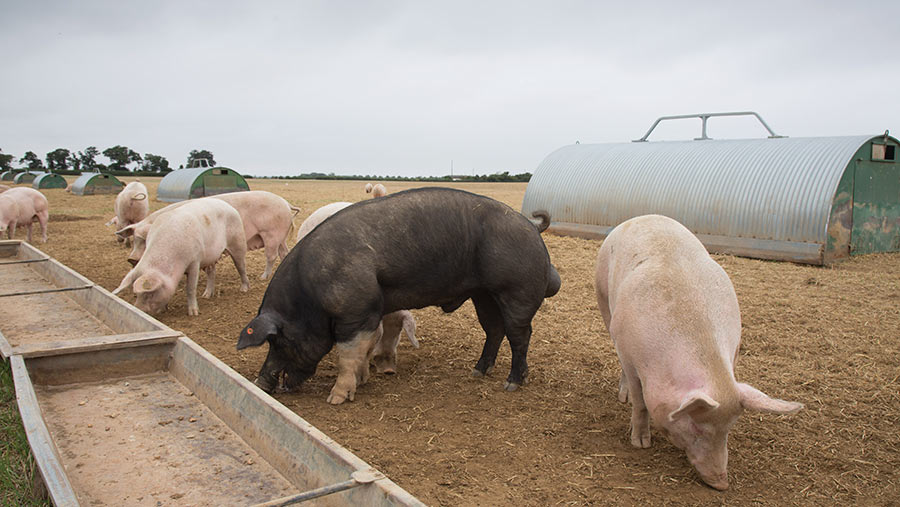 The past 12 months have seen the global landscape altered by African swine fever (ASF) and Covid-19, he says.

Germany’s trade with Asia was halted in early September after ASF-infected wild boar were identified inside its eastern border with Poland. Europe’s second-largest exporter, Germany shipped 326,000t of pigmeat to China in 2019.

“The ban means those exports are now back on the global carousel looking for a new destination,” Mr Batt says.

While EU prices weakened after the ban, countries like the US and Brazil saw values increase. Meanwhile, the coronavirus pandemic hit supply lines and backlogs in processing plants have led to price rises for pigmeat in these countries.

The British pig industry saw an uplift in prices for most of the year, driven by demand from China where pig numbers are still to recover from ASF losses.

The UK has further improved pigmeat supply self-sufficiency, with 7% growth in just two years, to 59.4% in 2019.

This trend could continue over the next few years as global supplies remain tight.

Despite some forecasts suggesting higher prices would see sow numbers increase, the Defra June Census Survey showed a 1.9% contraction to 402,000 head – the lowest level since 1983.

Instead, the year-end forecast of a 4% rise in pigmeat output to almost 990,000t, was driven by more piglets a sow and finishing weights exceeding 88kg.

The UK has approximately seven pigs to every 100 people, whereas Denmark has 215, the Netherlands 70 and Spain 63.

In Denmark, the average breeding herd is more than 1,800-head, compared to 680 sows in the UK. “Should we be trying to compete head-on with these countries?” Mr Batt says.

Instead he suggests using Brexit to look objectively at the unique selling points of UK production. There is scope to follow the poultry model and focus on free-range and high-welfare pork, Mr Batt says.

Commodities tend to decrease in real terms value each year. Marketing more UK pork as free range will create a point of difference and should prevent this deterioration.

He suggested a three-point plan.

In addition to the marketing plan, the sector could look to profit from collaboration with arable farms and opportunities under the Environmental Land Management (ELM) scheme.

Pigs could perform a vital break in arable rotations to fill the void left by oilseed rape, acting as a break and fertilising soil.

Producers must also embrace ELM support, which has a greater focus on natural resource management. Opportunities for any grant funding should be seized, Mr Batt says.

It will be interesting to see how the impact of depressed sow prices plays out long term. Many farms have bred old sows for another year and slaughtered gilts.

The top third of farms average 30.52 pig a sow a year and the national average has climbed to 27.92. The very top farms have managed to keep pre-weaning mortality under 10%, according to the AHDB.

This is amid alternative approaches to zinc oxide and cutting antibiotic use more generally. Management and system tweaks are, in the main, only seeing minor upsets in mortality performance, it seems.

ASF is too close for comfort – add Brexit, bird flu and Covid-19 and little is certain in markets.

On a brighter note, UK retail sales volumes are up 6% this autumn compared to last.