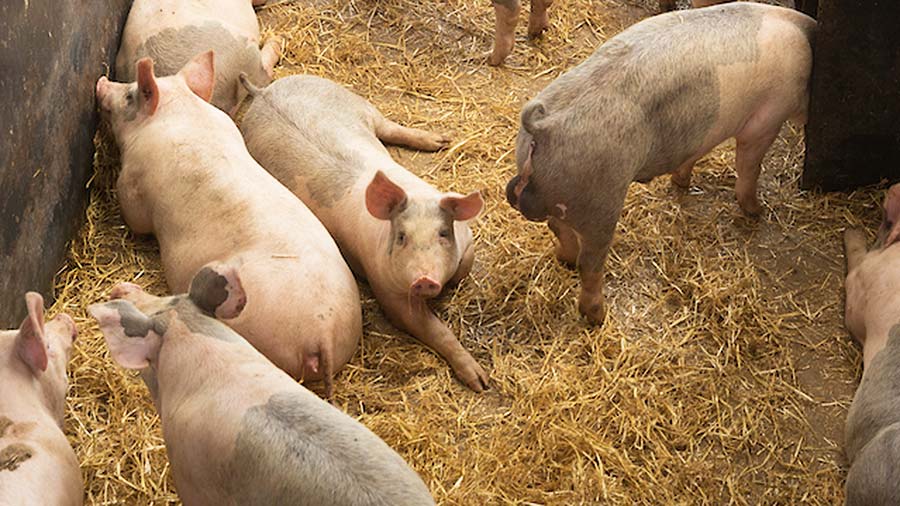 NFU Scotland (NFUS) has accused retailers of keeping an “unfair share” of pig sales, warning that the sector will be destroyed unless producers receive a bigger cut of the final price.

The union said the standard pig price (SPP) must break £2/kg to preserve the industry, as producers face soaring costs for feed, labour, haulage and energy.

Jamie Wyllie, NFUS pigs committee chairman, estimated the cost of production at about 204p/kg and said the SPP must rise just to allow producers to break even after months of crippling losses.

“While I appreciate that the pig price has risen, and that this week we saw the largest rise in price I have ever seen, we are still a long way from even covering the cost of feed, electricity, diesel, labour and haulage,” Mr Wyllie said.

The EU-spec SPP rose by more than 7p/kg on the previous week to 157.73p/kg in the week ending 9 April, according to the AHDB.

Prices are up by almost 20p/kg on month-earlier levels and are more than 15p/kg higher than the same week last year, having risen for the past seven weeks.

But Mr Wyllie said the price of feed had increased by 60% since February 2021.

With feed costs accounting for about 70% of total costs, producers are reportedly losing in the region of £46-£61 a pig.

Energy and wage bills within Mr Wyllie’s own business have rocketed. Despite significant investment in solar and wind energy, his energy bill is expected to exceed £500,000.

Labour costs will be more than £1.3m for the year after Mr Wyllie increased wages in line with inflation for his more than 40 staff.

“The blunt message for retailers and processors is that they must help,” Mr Wyllie said.

“We have long believed that the retailers have been keeping an unfair share of the final sale price, and record profit announcements this week suggest it is the case.

“In the year to date, the UK pig farmer is only getting around 37% of the final sale price when, in recent years, it has been up to 42%.

“This 5% may not sound like very much, but it would increase the price paid to the farmer by about 19p per kg. Where did that 19p go?”

The union is lobbying the government, processors and retailers to try to ease the pressure on farmers, as the need for extra costs to filter up the supply chain intensifies.

UFU beef and lamb chairman Pat McKay said: “Everyone is uptight about whether or not they’ll still be in business by the end of the season. Farm families are under immense pressure.”

Since spring 2021, fertiliser has increased by approximately £700/t, beef finishing rations by £80/t and breeding sheep rations by £100/t. Red diesel has also risen by 54p/litre.

“Beef and sheep farmers are getting it from all angles and it’s severely impacting their profit margins,” said Mr McKay.

“What we need is for the market to provide a stronger beef and lamb price if our farmers are to have any chance of keeping their head above water.”