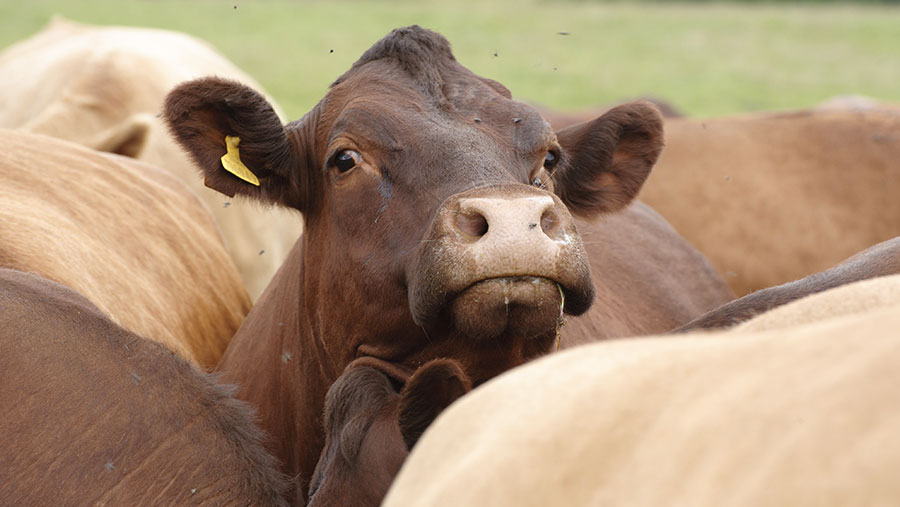 Two-fifths of steers are killing out above tougher weight limits, according to a study into the uproar over new beef grids and penalties.

More than 40% of British steers slaughtered in February had carcasses weighing more than 380kg, the maximum abattoirs are working towards through harsher deductions. That was a rise from 36% in the same month last year.

The research from AHDB Beef & Lamb showed less than 60% of young bull carcasses hit the 260-380kg target range this spring.

Heifers performed better, with 85% meeting the preferred range. But the proportion between 380kg and 420kg rose from 7% to 9% over the year.

Even though processors say they are going to reward the cattle they want, they cannot just change [specification] overnight, any changes need to be communicated well in advanceNFU chief livestock adviser John Royle

Farming groups have claimed millions has been wiped off the value of cattle, adding to the pain of a price slump. But the meat trade defended the changes, saying retailers only wanted cuts of a certain size.

AHDB’s research also shows beef producers are meeting the standards fairly well for fat, with four-fifths of steer carcasses in February classified as 3 or 4L.

However the conformation results raise questions. In February nearly half of steers and heifers made an R, which was slightly higher on the year.

But animals that killed out at Es and Us, high conformation grades that often score bonuses, were mostly in the heavier bracket, which draws more deductions.

AHDB market specialist manager Stephen Howarth said those animals currently fetched some of the best average prices — but the overweight penalties could now hurt their value.

“This could potentially have significant implications for those producers who are currently aiming to deliver animals with the highest conformation,” he said. “They might need to adjust their system towards producing lower conformation, lighter animals.”

AHDB’s report is first in a series aimed at improving the transparency of price reporting for beef.

The next, due by the end of June, will ask whether spec changes are linked to the slump in cattle prices.

The GB all-steers average has risen for the last three weeks, up 7p/kg to 318p/kg since the start of May. But prices remain more than 8p/kg down on the year.

NFU chief livestock adviser John Royle said the results showed farmers had not been given enough time to change their rearing and finishing systems.

He said the penalties may be nudging producers away from continental breeds, which produce high lean meat yields at a heavier weight, towards traditional, native breeds, which can be finished younger and smaller.

“Even though processors say they are going to reward the cattle they want, they cannot just change [specification] overnight,” he said. “Any changes need to be communicated well in advance.”

“There are different cutting techniques that can be used that yield cuts ready for the marketplace. Processors are not doing it, or they are not saying they are doing it.

“What they want to do is put a limit on the value of an animal.”