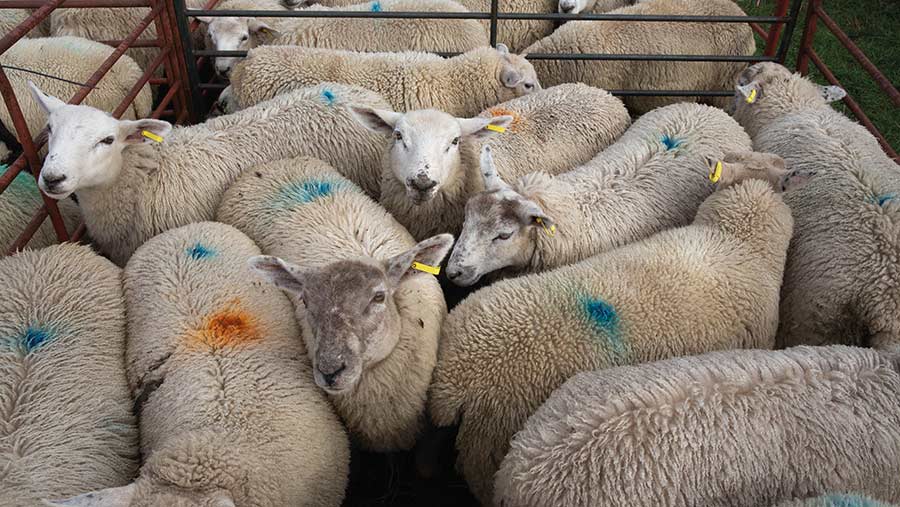 Store lamb sales are seeing strong demand off the back of a firm finished trade and plentiful grass. Weekly store numbers are rising as the sales season gets under way, and the dip in the finished lamb price a couple of weeks ago saw some store buyers around the primestock rings to pick up extra numbers.

At Longtown, Cumbria, auctioneer John Walton sold just under 3,500 store lambs on Tuesday, 10 August, at an average of £87-£88 a head. This was £7-£9 a head up on the previous week’s sale, thanks to a recovery in finished prices at the start of the week.

The trade saw Beltex-cross store lambs most in demand and making £105-£112 a head, said Mr Walton. Strong Mules were in the late £80s a head, with commercial Suffolk- and Texel-crosses in the same range.

In terms of the outlook for finishing those store lambs, several factors point to a continued tightness in primestock supply through the autumn and into next year, say auctioneers.

See also: Silvopasture – what it is and how it benefits livestock farming

These include the strong finished price encouraging sales of lambs earlier and at lighter weights through the season so far, reducing the overall potential sheepmeat supply.

A good number of these would have been gimmer lambs that would usually be kept back as replacements.

The AHDB forecasts that lamb slaughter numbers in the second half of this year will be 4% lower than July-December last year. However, it says this will be balanced by higher slaughterings in the first half of 2022.

“Lambs had a difficult start in the dry spring and didn’t thrive, which pushed prices up,” said Mr Walton. “But farmers have got on top of their lambs now and if the price dips, they can just shut the gates and make them a bit heavier – the farmers are in control.”

Auctioneer Elfor Morris at Ruthin Farmers Auction Company had 1,000 head booked for a sale on Thursday 12 August and was expecting an average in the mid £80s a head for short-keep lambs.

The sale of finished lambs at lighter weights so far this season will serve to tighten supply further, said Elwyn Davies of Hobbs Parker at Ashford, where 5,000 store lambs were booked for a sale on Friday 13 August. This is slightly down on the number at the same sale last year, when the drought forced earlier sales of stores than producers would have liked. Mr Davies said the strong finished prices and plentiful keep would make for a strong store trade.