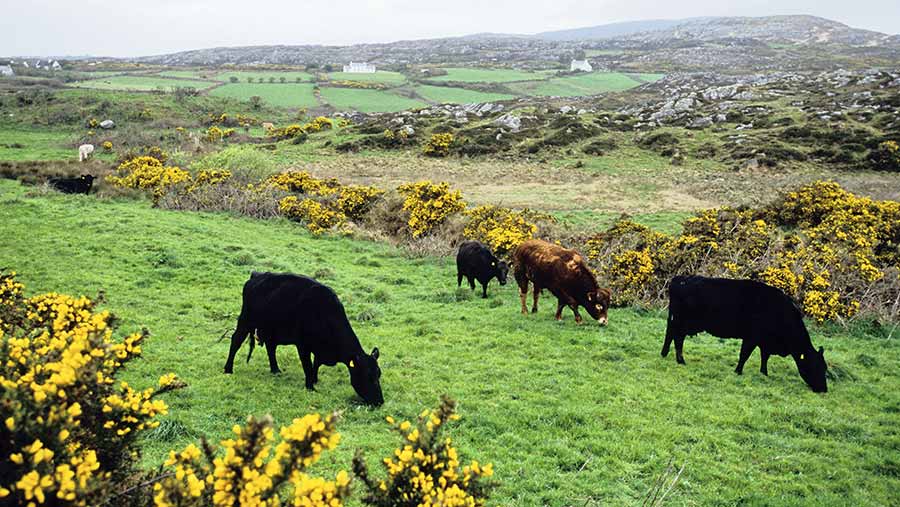 Rising beef cattle numbers at Irish processors could have a dampening effect on continuing price rises in the UK, the AHDB has warned.

Prices for GB beef have rallied in recent weeks while values in Ireland’s cattle sector continue to face downwards pressure from the coronavirus pandemic.

AHDB analyst Hannah Clarke said the heavier impact in Ireland was because of a reliance on exports to the UK and European foodservice markets.

“In April, Irish fresh and frozen beef exports were down 35% to the EU and 18% to the UK year on year,” Ms Clarke pointed out.

The lower demand and furloughing of abattoir staff meant Irish cattle throughput fell by almost 25% in some weeks during lockdown.

The result is that slaughter totals for Irish abattoirs are about 37,000 head down on year-earlier figures.

However, the substantial backlog is likely to mean plentiful supplies for some time to come.

Bord Bia, the Irish Food Board, confirmed that throughputs were rising. The latest figures, for the week ending 13 June, show throughputs were up by 3,883 cattle slaughtered compared with the previous seven days.

Prices for Irish beef are also well below GB cattle prices as the UK and European foodservice sectors are reopening slowly.

This suggested that any supplies that did cross the border were likely to be more price-competitive, Ms Clarke warned.

Producers in Britain and Northern Ireland are also concerned about the potential market effect of a €50m (£45.5m) direct aid package for Irish beef finishers.

“This support for the beef sector is an emergency response to a dramatic economic shock, to mitigate the worst Covid-19 economic impacts on these farm enterprises.”

The aid package was signed off by the Irish government on 12 June, although full details are still to be developed.

Irish Farmers Association (IFA) livestock chairman Brendan Golden said the package was vital and that many winter finishers would not survive without it.

However, farmers in Northern Ireland are concerned it may help to make their counterparts south of the border more competitive.

The Ulster Farmers’ Union (UFU) has urged the Department of Agriculture, Environment and Rural Affairs (Daera) in Northern Ireland to agree a £25m aid package for the agri-food sector.

Within that package, UFU beef and lamb chairman Sam Chesney requested £13.2m for the beef sector.

“The beef sector was first hit by the pandemic in late December, when the Chinese market went into lockdown, followed by the EU market,” he said.

“Farmgate prices were aggravated further when the UK went into lockdown. The closure of the foodservice sector became the final nail in the coffin for many beef and sheep producers.”

A study by the Andersons Centre, commissioned by the NI Livestock and Meat Commission, showed that, at the height of the pandemic, beef finishers were losing £238 a carcass.

The UFU wants to see aid worth £50 a head paid on cattle slaughtered in the first six months of 2020.