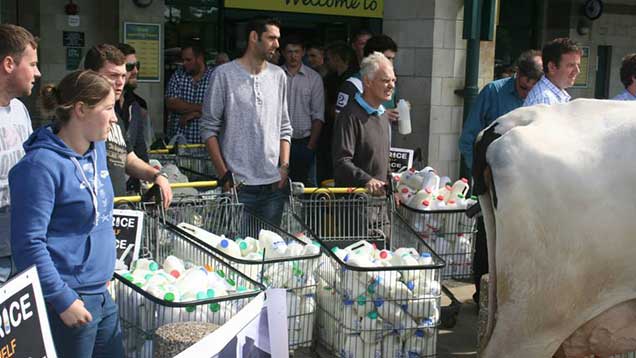 Farmers in Devon and Cornwall have become the latest to take part in the “milk trolley challenge”, which involves clearing milk from the shelves of supermarkets in order to raise awareness of low prices.

Dozens of farmers took part in two protests on Sunday (2 August), one at Morrisons in Bude, Cornwall, and the other at the company’s Bideford branch.

The farmers emptied all the milk from the shelves and then bought it at the tills, so they could hand it out to consumers outside the stores.

They asked shoppers for a donation to Devon and Cornwall Air Ambulance Service in return for the milk, raising £1,281 in the process.

The protesters were joined at the entrance to the store by a dairy cow, which was stood next to a banner stating: “You have been milked”.

Farmer Michael Shadrick said about 40 farmers had taken part at each site and it had proven a valuable PR exercise, with consumers responding well.

(Caution: There’s some strong language in the video)

“We had about 15 people there before the doors opened at 10am and then we went straight through and started emptying the shelves,” he said.

“At first there was a massive sense of panic from the staff, but when we told them we were buying it all, they realised there was nothing they could do.

“It only cost £40-£50 for whole trolleys full of milk, which made you realise how much product you can now get for a small amount of money.

“We told shoppers were were looking for a fair price on the shelf, so we could get a  fair price at the gate.”

Mr Shadrick, who runs 80 milking cows on his farm at Bradworthy, said taking part in such a protest was completely out of character for him.

“But we are a small family farm and things are really starting to pinch. I wanted to take things a step forward.”

The trolley challenge has been growing in popularity since six farmers entered a store in Chipping Sodbury, near south Gloucestershire, last week and cleared the shelves of milk.

Videos posted on Facebook show farmers have since targeted an Asda store in Strabane, County Tyrone, and a Morrisons in Guisborough, North Yorkshire. Action is also planned later this week in the Herefordshire area.

Farmers who visited the Asda superstore at Strabane on Friday (31 July) used up to 50 tractors and farm machinery to block a road into a car park.

They then went inside and cleared cartons of milk from shelves and wheeled it to the checkout tills before leaving the store.

Northern Ireland agriculture minister Michelle O’Neill has urged the European Commission to step in and raise the milk intervention price.

Meanwhile, supermarket giant Tesco has also been targeted in a series of protests by farmers angry about lamb price cuts.

Lamb prices have typically fallen by 20-30% a head over the past 12 months, but farmers say supermarkets have not reflected these prices on the shelves.

Dozens of farmers targeted a Tesco distribution centre in Cheshire on Sunday night (2 August) at the start of the week-long #nolambweek campaign (1-7 August) to withhold lamb supplies to supermarkets.

Producers carried placards accusing Tesco of broken promises on the back of the horsemeat scandal after it pledged to source more meat from the UK.

About 80 farmers held a protest at the Tesco store in Bangor and similar numbers targeted a second store in Llandudno.

NFU Cymru president Stephen James said: “The market situation in dairy, lamb and many other products is driving farming families to a desperate state, with returns from the market failing to cover costs of production.

“Farmers have worked very hard to gain the respect and support of the public for great Welsh food – now farmers simply want and need a fair return for years of investment.

“During these challenging times we ask the consumer to support us and the best way to do this is through demanding Welsh food. Welsh supermarkets should sell more Welsh food than they do currently.”

Hill farmer Gareth Wyn Jones was among farmers who took part in the Bangor protest.

He said he was “absoultely shocked” by the amount of New Zealand lamb being sold in the store.

He posted this picture (left) on his Twitter site (@1GarethWynJones) of one Acre Lane frozen lamb joint he picked out the freezer section, which was packaged with the words “Produced in the UK from New Zealand or Australia lamb”.

“I think it’s incredibly misleading,” said Mr Wyn Jones. “This ought to be looked at.”

He urged the government to step in to introduce a traffic light colour coded scheme, which would tell consumers if meat is produced in the UK or abroad.

“If it is a British meat product, where the animal is born, bred and slaughtered in the UK, it could carry a green colour code,” he explained.