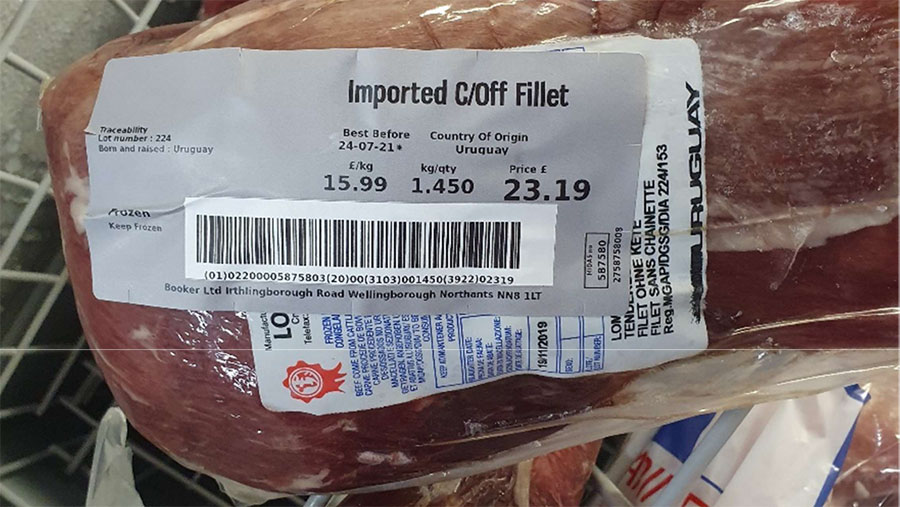 Food wholesaler Bookers has come under pressure from British beef producers after the company admitted relabelling meat from Uruguay.

In a letter to executives, Mr Shand said that as well as covering up the Uruguayan label, details on freezing and shelf life on meat joints were unclear.

See also: Alternatives to selling livestock at markets this autumn

The letter stated that the original source label for imported Uruguayan beef had been overlabelled, obliterating much of the original information, which included best-before dates.

Mr Shand suggested that although UK labelling laws were vague, covering an original label was in breach of Trading Standards and Environmental Health law.

“Our understanding is that good practice on frozen beef suggests it can be frozen for a period of up to six months, but certainly no more than 12 months.”

A statement from Bookers, in response, highlighted the wholesaler’s support for the British meat industry and said a two-year shelf life on frozen beef, lamb and pork was standard practice across the retail sector for food frozen at source.

The company blamed the overlabelling on a case of human error which was not in line with its required procedure.

It has since begun carrying out spot-checks across the chain’s UK stores to ensure the mistake does not recur.

Since receiving Bookers’ reply Mr Shand has called for sell-by periods on frozen meat to be limited to 12 months.