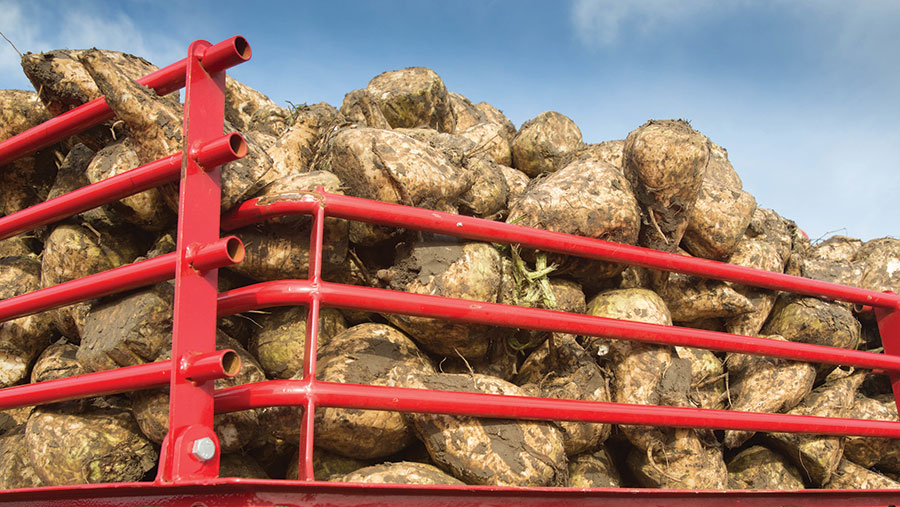 Although the sugar beet area in England has stabilised, the threatened loss of pesticide active ingredients, in particular neonicotinoid seed dressings next year, and the increasing prevalence of beet cyst nematode are all concerns, says Andersons director Nick Blake.

The start to the 2017 crop has been mixed, but many crops improved after June rain and indications so far suggest a reasonably large crop overall.

“The contract value of bonus over and above the base price is driven by the sugar marketing period from October 2017 to September 2018,” says Mr Blake. “World prices are falling from the four-year high of December 2016, but the EU June 2017 price was quoted at €498/t.

“If the price were to remain at this level, then we calculate that 32p would be added to the one-year contract, and 81p to the three-year contract.”

The ability for existing three-year contract holders to roll forward their commitment for the next three years (effectively tying them in for four consecutive years) was a useful option for growers for 2018, providing an extra 50p/t.

At the time of writing it is understood that contracting is not yet complete, with BS looking for additional area for 2018.

Earlier this year, plans were announced by Al Khaleej International Ltd for a project to invest in a new sugar factory in Yorkshire, the first in the UK for around 90 years, expected to process 24-26,000t/day during the campaign.

This could bring a new entrant to the market, but due to its location it is unlikely to provide sufficient competition to result in a significant increase in price, as demonstrated with AD sugar beet in the East, says Mr Blake.

“However, there are ways to attract growers other than price,” he adds. “Current payments terms offered by British Sugar add cash flow certainty, a recognised benefit.

“Haulage and harvesting arrangements, co-ordination to suit crop and soil conditions, and delayed payment terms for seed could also be useful incentives.”

Sugar beet for many growers will be their most profitable crop on the farm, and that is likely to be further helped by a bumper harvest this season and a 2.3% price rise for the crop to be drilled next spring.

The area of the crop currently being harvested is up by a third at 107,000ha encouraged by an 8.4% price rise for this beet campaign and the ending of European Union quotas in October 2017.

Around 140 new growers have joined the existing 3,500 beet farmers this season and next spring some other new recruits might be attracted by a crop that can improve rotations and blackgrass control.