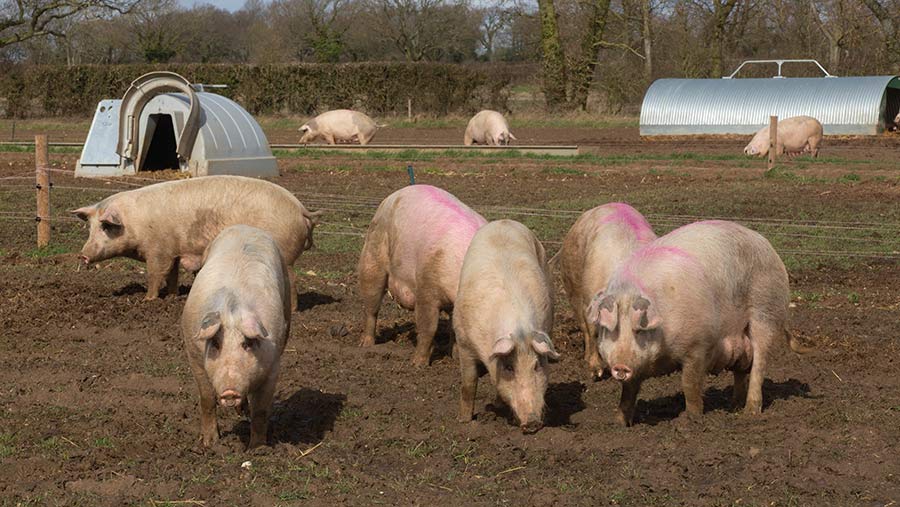 A radical rethink about the way the British pig sector operates is urgently needed to help reverse the crippling losses that producers now face.

For too long, the industry has been striving, and failing, to compete with highly efficient global commodity pigmeat producers, says consultant Harry Batt of Andersons Midlands.

It should instead refocus on products that meets consumers’ changing diets and environmental concerns.

According to AHDB figures, producers lost on average £25/head on finished pigs in the first half of 2021, meaning that the industry has been losing a staggering £145m, or £800,000 a day.

The situation escalated further in the latter part of the year with on-farm culling becoming a necessity due to labour shortages in the supply chain. This is unsustainable.

Over the past 10 years producers have experienced volatility, but this latest challenge might just be a step too far, with margins for some at a 10-year low.

Producers also face rising input costs, not least for feed, and the challenges of further investment to meet emissions legislation.

These demands will signal the end for some, leading to expectations of a significant contraction in the breeding herd.

The first eight months of 2021 saw increased pigmeat production, with output up 320,000t or 6.5% on the same period in 2020. This is a significant uplift in numbers slaughtered.

Was the wider supply chain aware of this level of expansion? Are carbon dioxide and abattoir labour shortages the problem, or have these just exacerbated a situation that was already at tipping point?

As an industry, the emphasis has been on technical improvements to compete against global and EU counterparts.

However, it seems doubtful that UK producers will ever succeed in displacing imports or becoming competitive on a world scale.

Brazil, Canada and the US can produce a kilogram of pork for 90-95p, almost half the cost of the UK.

Carbon-neutral pork could be breakthrough

We know that diet changes and environmental concerns are driving these shifts, so a focus on producing what could be the world’s first carbon-neutral meat makes sense.

The pork industry is already at an advantage by having an integrated supply chain, therefore it would be possible to achieve, subject to buy-in by all parties.

There would be benefits for all, not least for the supermarkets which are already trying to encourage awareness and promote environmental purchasing decisions, having invested heavily in carbon labelling.

The main change required to produce carbon-neutral pork would be a radical rethink of the diet, which has been designed to fit with the current B&B model.

Feed and manure produce more than 80% of emissions

More than 60% of the sector’s emissions are related to feed, and the environmental impact of growing specialist crops such as soya. Manure storage and management contribute to a further 27% of pig emissions.

In addition, a carbon-neutral pig industry should encourage greater carcass utilisation, with a large proportion of exports being low-value cuts, including offal.

However, there is limited value to these exports, so might this offer a solution to the UK’s food poverty, while helping to provide a balanced diet?

In the short term, there is limited scope for farm-led improvement.

Regular communication with processors is key to help understand processing throughput earlier, with a view to reducing the quantity of fat pigs on farm.

Given the recent hike in fertiliser prices, there may be an opportunity to strike a slurry for grain or slurry for straw agreement with neighbours.