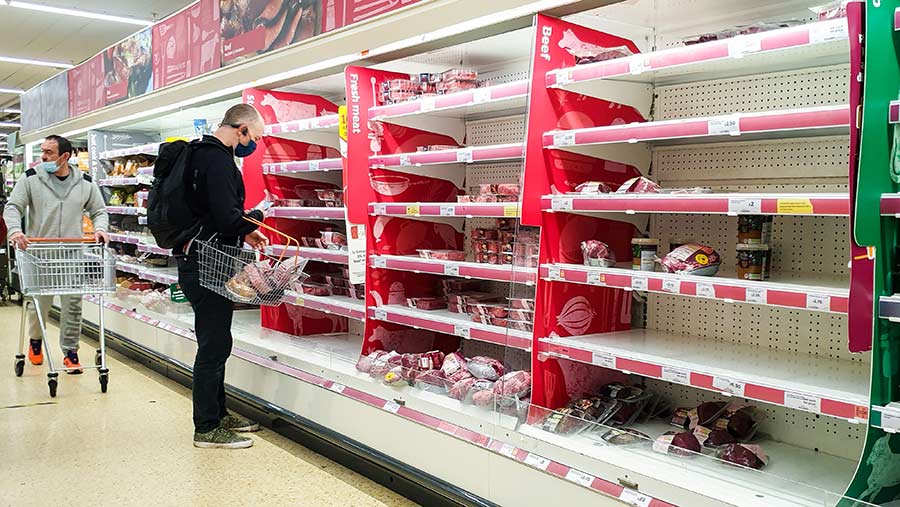 Retail food and drink sales hit a record £8.1bn during the 2020 Christmas period, according to the AHDB and market analyst Kantar Worldpanel.

For the four weeks ending 27 December 2020, Kantar’s figures show grocery sales grew by £912m – up 11.7% on the same period in 2019. More than two thirds of the increased spending was online, with an extra £695m of sales over the four weeks compared with Christmas 2019.

See also: Benefits of selling beef into the ethical market

The AHDB said the much of the increase was down to the Covid-19 lockdown which prevented consumers from eating out.

It also pointed out that the biggest gains were seen in the dairy and red meat sectors.

Dairy sales saw the highest percentage increase with spending up 14.1%. In the cheese sector higher consumption levels seen throughout the three lockdowns were bolstered further, with volumes rising 16.7% in December to 47,000t.

Home-cooking and staple cheeses saw the largest upturn in volumes. Cheddar was the biggest contributor to growth with an extra 3,000t sold. However, halloumi, up 62%, and mozzarella, up 51%, saw the largest proportional rises.

One casualty was so-called cheeseboard types which lost share over Christmas as a result of smaller gatherings during lockdown, said the AHDB’s retail insight analyst Grace Randall.

Cream also saw an increase of 13% on year-earlier levels over the four-week Christmas period.

Red meat enjoyed the best Christmas on record, outperforming both turkey and whole fish. Over the two weeks before Christmas, roasting joints and gammon saw a year-on-year sales uplift of £62m.

Gammon was bought by 26% more households than any other meat at Christmas, with turkey the second most popular protein.

Uncertainty over who was coming to dinner meant more households chose smaller birds and crowns than previously. This trend was mirrored across all meat sectors. But as extended families were prevented from gathering, a huge increase in the number of households buying roasting joints meant volumes still rose.

Beef was the biggest contributor to volume growth, increasing by 18% compared with Christmas 2019, with an extra 1,400t sold.

Of this, bacon contributed the most growth with volumes up by 1,900t, followed by 1,300t more sausages sold over the four weeks to 27 December.

Like the dairy sector, specialist products such as party foods containing meat lost volume as large festivities were put on hold.

Ms Randall said capitalising on the overall sales growth next Christmas would depend on promoting the great taste of red meat. With many already planning a bigger-than-usual Christmas in 2021, party foods could capitalise on additional social gatherings, she added.