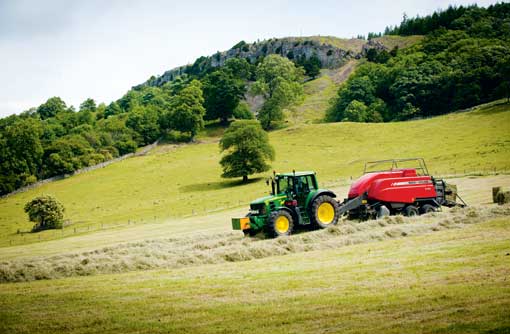 “We’ve been flat out since the end of March and have done the same acreage as usual on the contracting side, just a lot later than usual,” says business owner Adam Metcalfe.

Despite crops looking a lot better, he is leaving his own cropping budget at its reduced levels and is still nervous of the outcome, although he thinks crops will produce better than budgeted yields. Mr Metcalfe has accounted for a 24% drop in wheat yields, 14% for barley and 16% for oilseed rape compared with an average year.

Like many other growers, he has watched with increasing apprehension as grain prices have fallen over the past few weeks.

In a departure from his usual marketing practice, he has put 300t of barley into a pre-Christmas pool. This is grown on land under one of several contract farming agreements, with the pool used to reduce the impact of volatility.

The decision to sell 300t of feed barley to a local pig producer a few weeks ago at £158/t for September looks right. With prices falling, Mr Metcalfe wishes he had sold more but the experience of last year’s low yields and post-harvest price rises has put him and many others off committing the 2013 crop.

First-cut silage made by the contracting business has not yielded as well as expected and may be 20% down, he reckons. However, the farm’s own fodder beet looks as well as it has ever done.

The first lot of 61 finished lambs was sold through Darlington Farmers Auction Mart on 20 June with the best making more than £100 a head – the first time the business has ever achieved this.

“We didn’t get the really bad weather that some people had but the lambs don’t seem to have done as well as we would have expected.”

The farm is about to take on its first apprentice, helped by a £1,500 government grant towards the cost of this employment.

Eighteen-year-old Adam Close is the nephew of the farm’s shepherd Graham Wood and will spend four days a week at the farm starting in mid-July and one day a week at Askham Bryan College studying mixed farming.

“Adam has worked a lot with the sheep in his school holidays already and we plan to give him as much variety of experience as possible,” says Mr Metcalfe. “He was keen to get a full time job on a farm but I suggested he would be better to get a qualification while working.”

Like many other farm employers, Mr Metcalfe has yet to plan what his policy will be when farmworkers’ pay is no longer governed by an Agricultural Wages Order from 1 October.

Deciding when to go into the nitrogen fertiliser market is also difficult this season. Last year he bought UK manufactured ammonium nitrate in June at £295/t only to finance this purchase for months and see the price go nowhere.

This year he has quotes for AN between £290/t and £265/t and prices seem steady, so with cashflow facing pressure from low grain prices, he is reluctant to commit.

The fungicide regime this season will be very much on a field-by-field basis with the overall spend likely to be down. “We haven’t spent a lot and have taken our agronomist’s advice on which crops will be worth spending on and which will not.”