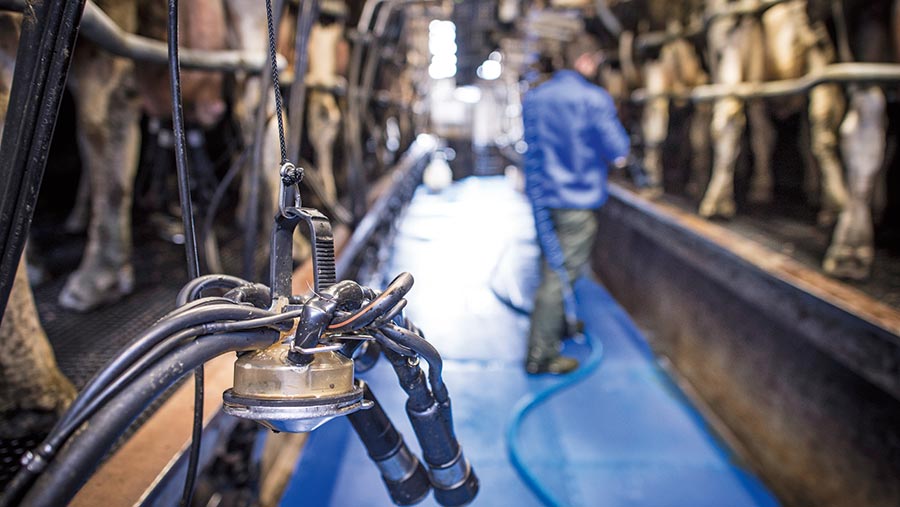 Hefty price cuts from the main milk buyers reflect what is happening in wholesale markets and prices should not drop much more in the short term, according to market analyst Chris Walkland.

He said producers should budget for 25-26p/litre, but hope for 27p/litre through the spring flush.

Arla shocked many producers and drew criticism from national farming representatives over its recent 2.16p/litre price cut for March, one of the largest in its history.

This was followed hours later by a 1.25p/litre March drop by First Milk and a subsequent 1.5p/litre cut to Muller’s April price.

“Butter wholesale prices are driving everything at the moment – you can tell it’s not cheese because a shortage of British cheese is holding these contract prices steady,” said Mr Walkland.

He said that the problem is that the rising butter futures market is setting unrealistic expectations for farmgate milk price rises, but that this only represents a few hundred tonnes, which is a tiny proportion of the market.

“[Butter] buyers remember the huge price rises seen last year and don’t want to miss the boat when they see prices moving up. The market is being driven by sentiment and fear.”

Mr Walkland added that there is little substance to the recent ups and downs of the butter futures market, which he compared to a yoyo.

This market was artificially rising as buyers chased the last supplies of winter butter.

“Milk prices have fallen because that’s where the markets were heading. It has been clear since November when I said farmers should expect 26p/litre from turnout. Why people are shocked is beyond me.”

He said markets should remain pretty stable at 27p/litre through the flush – and prices will be slightly higher for cheese producers.

Sustaining the current level of milk prices would require dairy wholesale prices to hold firm in the face of increasing production on the continent from the likes of Ireland, Germany and Poland, according to AHDB Dairy.

However, despite rising EU and New Zealand milk production since November, this was unlikely to fully satisfy European requirements.

‘Get expert advice to keep things on track’

The NFU, NFU Cymru and NFU Scotland have all urged Arla in the past few days to do more to introduce volatility management tools to insulate its 2,500 UK producers, who have already seen prices fall by 16% in 2018.

Mr Walkland said volatility management tools are being held back by Arla producers in Germany and Denmark.

He said that he understood that Arla’s EU producers do not want these tools and as a farmer-owned co-op there is little the processor can do – so the processor could not be criticised.

“I think these producers need to stop burying their heads in the sand and realise volatility management is coming and they need to start looking to see which tools are out there.”

Futures are not the answer for farmers at the moment

Director of Kite Consulting, John Allen, has invested his own money to trade skim milk powder (SMP) and butter options on the futures market to better understand how they work.

The mechanism needs to be given more time, he said.

“Half the problem is the language and jargon is like an alien place for many producers.

“It’s also not that easy to trade and because volumes are small, it is not that liquid at the moment,” said Mr Allen.

“Muller has led the way [with its futures-based contract] and many producers have used its model, but futures aren’t the only option available and all milk buyers should have their own versions that work for them and their farmers so market signals rapidly come through to farm level.

“One model that has been very well received is between the Co-op and Lactalis with a fixed price of 27p/litre for 12 months, and I am pretty sure more processors will announce their own models soon.”