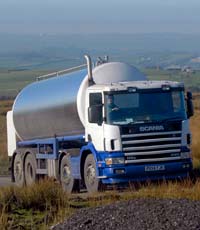 Farming unions have called on milk processors to raise farmgate milk prices, after some of the UK’s largest processors announced strong financial results for the past six months.


Dairy Crest made a pre-tax profit for the half-year of £34m, up from £28.4m, while Robert Wiseman Dairies‘ six-month interim report said profit before tax had increased 81% from £11.6m to £21m. Milk Link this week also reported “satisfactory” half-year profit before tax of £4.9m.

“With wholesale markets for cream, powders and butter soaring, cheese imports dropping and liquid milk consumption growing, we feel it is high time this was reflected in the prices being paid back to those producing.”

Dairy Crest said it would pass some of the higher cream returns back to farmers in the form of a 0.2p/litre “market adjustment” bonus for milk supplied in November. It has also hinted a similar or slightly higher bonus could be paid next month.

“Dairy Crest’s liquid suppliers will be extremely pleased with this payment, and will appreciate that it has been backdated to reflect the continued strength we’ve seen in the cream and butter markets,” NFU dairy board chairman Gwyn Jones commented. “I hope that the farmers representing Arla and Wiseman suppliers will be just as successful at getting cream price increases passed back to farmers promptly.”

But, Eifion Huws from the Farmers’ Union of Wales accused some processors of “crying wolf” and making excuses for not passing increases back to producers.

He said Defra’s average UK farmgate price in September of 24.05p/litre was still 2.5p/litre lower than September last year, despite an upturn in world and EU prices since then. “If processors don’t play their part they may soon discover most of their loyal suppliers have disappeared altogether.”