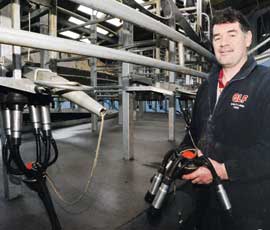 A Welsh dairy farm is saving up to 40% on milking parlour hot water costs by converting the heat generated by milk into energy.

Wyn Evans invested £2353 in a heat recovery unit and £3227 on a variable-speed drive for the vacuum pump for his 50-point rotary at Trefynnys Farm, Carmarthen.

He calculates that his electricity bill for each milking is £8.75 – 40% less than he had been spending. “I’ve had a new electricity metre installed so I know the savings, they are there in black and white,” he says.

More energy is consumed on dairy farms than in most agricultural operations because it is needed in the milking process, for cooling and storing milk, to heat water and to power lighting and ventilation.

DairyCo estimates the average dairy farm uses between 200kWh and 400kWh of electricity a cow a year and that the average cost of water is about £31 a cow a year, rising to more than £100 a cow a year on some units. About half the total energy requirements are for milk cooling, operating vacuum pumps and heating water.

This means that a producer with a 150-cow herd could be paying a combined water and electricity bill of more than £7500 a year, a figure that is set to rise as energy costs increase.

Ironically, the two largest energy costs for dairy farmers are associated with taking heat from milk and adding heat to water for cleaning.

Many farmers are discovering that an efficient way of heating water is to recover heat energy from the refrigeration condenser units.

A heat recovery system captures heat from bulk tank compressors to pre-heat water. This heat would otherwise be wasted. The amount of energy recovered depends on the volume of milk produced and compressor running times.

Up to 50% of a farm’s water heating requirements can be met through heat-recovery systems.

At Trefynnys Farm, Wyn Evans milks 280 high-yielding Holstein Friesian cows and, with an all-year-round system, the parlour is operational twice a day, 365 days a year.

Mr Evans reckons his system will pay for itself in less than five years, but savings do vary from farm to farm, depending on electricity supply contracts.

“My tip is to shop around every 12 months to see which electricity provider is offering the best deal. We are currently paying an average of 7.5p a unit,” he says.

Mr Evans is delighted with the cost savings from his heat recovery and vacuum on demand systems. “Our costs are going up all the time. If we can make savings by using energy more efficiently it will be beneficial in the long term for our businesses,” he says.

On an average dairy farm, each milking point requires 18 litres of water at a temperature of 85C for circulation cleaning. This is normally heated in an insulated vessel using an electric immersion heater.

With a heat recovery system similar to the one Mr Evans installed, water can be pre-heated to 55C at no cost. According to the Carbon Trust this represents a saving on heating costs of £4 a cow a year. On a 150-cow unit the energy savings could equate to £650 per year.

Variable-speed drives vary the frequency of the vacuum pump depending on the actual vacuum needed at that time. There have been few studies on the lifetime energy reduction resulting from their installation. But, savings on energy which range from 30% to 75% are quoted by installers. According to Jonathan Swain, technical projects officer with Farm Energy, 50% is considered a reasonable value for costing purposes.

Mr Swain says the numbers suggest the case for installing VSDs is not clear-cut and needs considering on an individual farm basis. “Some installers will insist on upgrading the vacuum pump set up as well which can double the cost of installation,” he says.

Heat exchange units – how do they work?

Milk refrigeration works by extracting calories from milk through a cooling unit. Bulk milk tanks use compressed gas to cool milk. A large amount of energy is used to run the compressors, which in turn creates lots of heat that is vented into the atmosphere and wasted. Heat exchangers transfer this ‘waste’ heat into heating water.

There are two main types of heat recovery system. One uses a plate heat exchanger made up of a series of metal plates sitting side by side. Milk and water run in opposite flow channels within these plates and the water absorbs the heat from the milk on the opposite side of each plate.

These systems reduce energy costs by recovering waste heat that typically gets discarded by the milk cooling condenser units. The recovered heat is used for preheating water for washing milking equipment. An additional benefit is that the milk cooling system will work more efficiently.

This technology can be retrofitted to any existing refrigeration system.

Variable-speed drives for vacuum on demand pumps – how do they work?

Milk vacuum pumps on dairy farms have enough capacity to cope with the largest possible anticipated demand. This demand occurs less than 1% of the time, usually when a cluster drops off the cow causing air to be drawn into the system, but the pump always operates at full speed, wasting energy. By applying a variable frequency drive to the vacuum pump system, there can be energy savings of between 50-80%.

A variable frequency drive matches pump speed to the actual air in the system, modulating the speed and energy consumption of the motor to match the actual vacuum needed.

The amount of energy savings a dairy farm will achieve using this control system varies depending upon the degree to which the pump is oversized and the hours the pump operates per day. Fitted prices range from £3500-6000, depending on the motor and vacuum pump sizes.