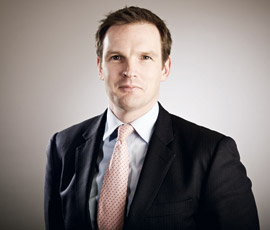 Daniel Poulter, the minister in charge of the government’s hospital food policy, provides carefully worded answers to our questions

Are you satisfied with the amount of British food being served in NHS hospitals?

Figures from 2012 show that 64.5% of food ingredients provided through NHS Supply Chain contracts were grown or reared in the UK.

Given seasonal factors and weather-related challenges faced by UK farmers, this is a positive achievement, but NHS Supply Chain continues to explore how this might be increased.

Our research shows that 71% of trusts supplied by NHS Supply Chain/ISS Healthcare have no idea how much British food they are procuring. Is this acceptable in the wake of the horsemeat scandal?

NHS Supply Chain routinely captures information on the source of food products from suppliers on their agreements.

What are the barriers to increasing the percentage of home-grown food in the UK?

There is scope for NHS organisations to source seasonal produce and specify that food is produced in line with UK food production standards where relevant.

However, under public sector procurement rules, the NHS is prohibited from placing a geographical restriction on the origin of food in any food procurement exercise.

Why were government buying standards for food and catering services rolled out to central government and prisons in England, but made only voluntary for the wider public sector, including the National Health Service?

NHS trusts are independent organisations and make their own purchasing decisions. However, we do encourage the NHS to comply with the government buying standards (GBS). For instance, the NHS operating framework for 2011-12 required the NHS to consider the GBS for food.

In addition, the Improving Hospital Food Project, announced in October 2012, includes a clear commitment to promote GBS in the NHS. It states: “The criteria set out in the government buying standards for food should be adopted as standard where practical and supported by procurement practices.”

Should government buying standards be rolled out to the NHS and made mandatory instead of just a voluntary set of guidelines for trusts?

We have taken direct action, via our Improving Hospital Food Project, to support the NHS in using the GBS. But the final decisions on how food is purchased, prepared and served are best made locally.

However, we have been working with NHS Supply Chain to highlight GBS-compliant meals, and have arranged workshops to promote best practice. We have included an assessment of hospital food in the new patient-led assessments of the care environment, which started in April 2013 and includes questioning on compliance with the GBS. We are also working with the Soil Association to discuss the possibility of aligning its independent quality mark – Food for Life – with the GBS.

Does the government/Department of Health (DoH) have any concrete plans to get more British food into NHS hospitals? If so, please explain.

DoH already provides support to the NHS to help it meet the GBS and other good practice standards.

Under EU law, we are within our rights to insist that imported food matches quality standards of home-grown food. Other EU member states do this – why don’t we introduce a minimum of farm-assured British/Red Tractor standards?

Individual hospitals determine the specification of food they procure. One of the department’s fundamental principles is for the NHS to adopt the GBS for food and catering services, which requires at least 10% of food and drink to be produced to certified or assured higher level environmental standards as well as a commitment to source food meeting UK or equivalent standards of production, subject to no overall increasing cost.

We have demonstrated buying British can be cheaper, better for the environment and boost local economies. Isn’t this a better deal for the taxpayer rather than relying heavily on foreign imports?

Individual hospitals have a responsibility to ensure they achieve value for money through their procurement.

The Public Services (Social Value) Act 2012, which came into effect this year, provides scope for economic, environmental and social benefits to also be taken into consideration in public procurement.

Based on these findings, would you: a) Consider a review of hospital food buying practices? b) Encourage hospitals to buy more food locally?

The department already encourages adoption of the GBS for food and catering services within the NHS and we also expect hospitals to regularly review their nutritional standards and food-buying practices.

Is there a relationship between the cost of hospital food and quality?

A study published in 2002 by the Audit Commission found no relationship between food cost and quality. We have repeatedly looked for a link since then, and have been unable to find one.

The department will be undertaking a further analysis of the data to find out if there is a link between expenditures and the quality of the food delivered.

Hundreds of government ministers, celebrity chefs, hospital campaign groups and farmers have backed our campaign to get more British food into our hospitals. Do you plan to do anything following our campaign?

We recognise how important good food is in helping patients make a full recovery. NHS trusts are rightly responsible for compiling their own menus and making decisions about the food they serve; this will differ between hospitals depending on their individual local circumstances.

There is also a wealth of support and guidance available to ensure that high-quality nutritious food and excellent care at mealtimes is the norm.

Sign our petition and back Farmers Weekly‘s campaign to get more British food into British hospitals.

Farmers, celebrities, industry leaders and politicians have all backed the Get Better, Get British campaign to win a bigger share of the £500m spent by government on hospital food.

We surveyed 200 National Health Service Trusts and revealed a mash of buying policies that varied from hospital to hospital.

Some had passed all responsibility to outside contractors. More than two-thirds admitted they didn’t even know where their food had come from.

Those that did know revealed food is shipped thousands of miles. Much of it comes in below British farm assurance standards.

We need your support to encourage DEFRA and the Department of Health to look again at food procurement across the chain. It is possible to include government buying standards, already used for prison food suppliers, to be extended to the NHS. Including the NHS in the standards and adding a requirement for all food in hospitals to meet Red Tractor assurance would allow British farms to compete on level terms with imported food.

A shorter supply chain means better traceability, fresher food, lower carbon emissions and less waste. It is a win for the public, patients and farmers.

Read more news from our Get Better Get British campaign which aims to get the NHS to source more home-grown grub for its hospitals.