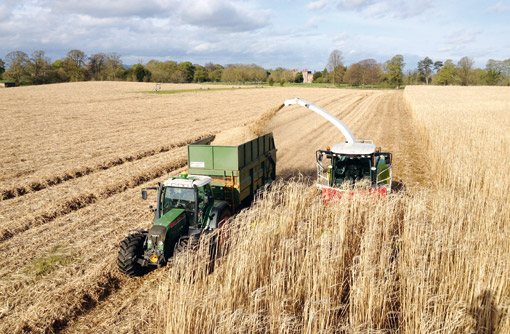 Lower heating costs and a dependable fuel source are two of the benefits on offer to farmers who opt for miscanthus as a means of firing their biomass boilers.

According to Keith Wilson, managing director of International Energy Crops, this renewable fuel can cut heating costs to just 1p/kW for 20 years or more, less than a fifth of the cost of kerosene and LPG.

The company recently launched its “field-to-furnace” biomass boiler service and is now working with broiler producers across the country to deliver cost savings and energy security.

“When we sit down with broiler producers to discuss heating their sheds with biomass rather than LPG or kerosene their main issue is fuel security,” he explains, claiming that some producers who have switched to woodchip are now having real concerns about the future availability and cost of their fuel source.

“With the Renewable Heat Incentive (RHI) scheme fixed for 20 years, biomass heating is a long-term project. So when choosing a boiler it’s vital to think about fuel supplies over this time-frame and ensure you can make the best of any medium-term changes in relative availability and pricing.

“The Okotherm and Linka multi-fuel boilers we supply and install have a 30-year-plus track record of burning miscanthus and a range of other high ash fuels in Germany and Denmark. In addition to miscanthus, they can burn virtually any stem-based fuel, including all types of straw, grain cleanings, woodchips or pellets. So you have complete flexibility of fuel supply throughout the 20-year RHI period.”

With the ever-increasing demand for biomass fuels and the rising cost of woodchip and pellets, miscanthus provides an attractive alternative energy source, he says, especially if producers grow their own crop and take advantage of the 50% grants for establishing it available through the Energy Crops Scheme.

According to Mr Wilson – who heats his own farm business at Old Springs near Market Drayton in Shropshire with home-grown miscanthus in one of his boilers – it takes a surprisingly small area of the crop to provide enough fuel.

It is also cheap to grow after the first two years of establishment. The Energy Crops Scheme allows – but doesn’t compel – 2014 or 2015 planting. But as the current scheme comes to an end this year, producers need to apply by August to keep this option open.

“Well-established miscanthus yields up to 20t/ha every year for 20 years or more,” he reports. “It comes into full production in around five years, and after the initial two year establishment phase requires little, if any, fertiliser or herbicide input.

“Not only that, but the fuel is boiler-ready straight from the field following precision chop forage harvesting at 15-18% moisture. And it generates an average 4,150kW/t DM, so a typical broiler shed requiring 240,000kW/year needs just 4ha of cropping.

“Including a fair allowance for the income forgone in not growing an alternative crop, and interest on working capital, the 20-year net cost of miscanthus production works out at less than £40/t. On this basis we’re looking at an average cost over the crop’s lifetime of around 0.9p/kW. This knocks spots off a current propane cost of 5.4p/kW and woodchip at 2.5-3p/kW,” Mr Wilson claims.

IEC Heat Solutions offers advice in growing as well as using miscanthus. “We can complete the ECS grant applications, establish crops and supply fuel at around half the current cost of propane or kerosene while these crops are coming into full production.”

And for producers who do not have spare land, the company has short or long-term supply contracts, offering similar levels of security to “growing your own”.

Alternatively, Mr Wilson suggests cutting out the middleman and working with a local grower who either already has miscanthus to sell, or who might grow the crop on less productive land for a guaranteed local market.