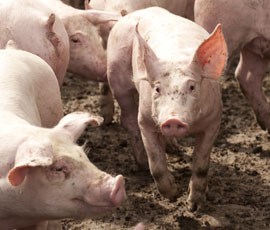 Some contract prices have been cut slightly as the Christmas/New Year holiday approaches.

The latest Deadweight Adjusted Pig Price (DAPP) rose by 0.10p to 147.51p while shout prices issued by the big five abattoirs saw Cranswick and Vion reduce their quotes by 1p/kg as follows:-

The euro has remained reasonably static and traded on Friday worth 85.56p. The upcoming Christmas/New Year holiday in Europe has effectively reduced export demand for cull sows, which this week fell by 2-4p and were traded in the 116-120p/kg range, according to specification.

The latest AHDB 30kg ex-farm weaner price continues to improve and now stands at £43.54 a head, helped by lower feed prices, with ex-farm feed wheat quoted at about £139/t compared with £178/t a year ago.

Providing UK pig availability remains reasonably tight and no significant numbers are rolled over the Christmas/New Year period, finished pig prices in January are forecast to remain relatively firm and 10p/kg higher than they were at the start of the year.