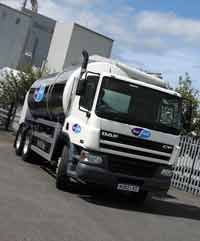 First Milk has announced plans to build a state-of-the-art creamery on the Mull of Kintyre peninsula in Scotland.

The new plant will replace the existing Campbeltown creamery – which was built in the 1820s – and will be funded by a £3.9m Scottish government grant, proceeds from the sale of the co-op’s old creamery site to Tesco and the co-op’s own funds.

First Milk said the creamery was worth £11m to the local economy and the plans effectively secured the future for 100 jobs and the 42 dairy farms that supplied it. Over 200 jobs would also be created at the new Tesco store.

“This substantial investment is a great boost for the peninsula of Kintyre and the dairy sector,” Scotland’s rural affairs minister Richard Lochhead said when he visited Campbeltown today (1 July).

“I made it clear at our recent Dairy Summit that we are committed to doing all we can to support the Scottish dairy sector. Our largest-ever grant for a dairy company in Scotland proves that we are willing to turn words into decisive action.”

Peter Humphreys, First Milk chief executive, added: “The creamery and the dairy farming community on the peninsula are mutually dependent, and this new investment secures the future of the dairy industry in this part of Scotland.”

He was “delighted” that Tesco was involved with the project and was optimistic about the future of the Mull of Kintyre cheese brand, which is produced at the creamery.

NFU Scotland president Jim McLaren called the announcement a “shot in the arm” for dairy farmers. “Confidence among dairy farmers is in need of a boost and this significant investment in modern plant to produce an award-winning product maps out the route to reinvigorating the dairy sector across Scotland.”