For new entrants looking for ways into farming, the Duchy of Cornwall offers excellent opportunities as it has a policy of prioritising those starting out in the industry.

Read about the ethos of the estate, what a Duchy tenancy involves, tips for applying, and hear from farmers who took up tenancies.

The Duchy of Cornwall rural estate

Long-term vision rather than short-term gain is the overriding ethos for the Duchy of Cornwall, which often prioritises new entrants when its farms come up for reletting.

“The prince is passionate about farming and is determined to make a difference,” says the Duchy’s secretary and keeper of the records, Alastair Martin.

“So when a farm becomes vacant, we tend not to bolt it on to an adjoining holding, but create starter units or even progression units and let those separately.”

Mr Martin admits that breaking up holdings and offering blocks of land to help existing tenants spread their costs would probably be more remunerative in the short term.

But in the longer term the Duchy is convinced that it is better served by creating opportunities for new entrants. 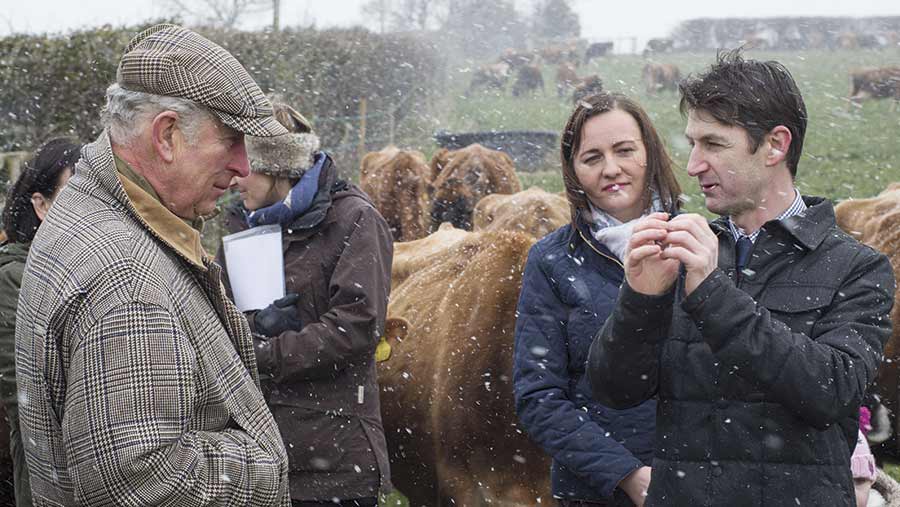 What the Duchy looks for in applicants

Generally the Duchy has one or two farms a year that come on to the rental market and competition for these holdings can be intense.

The last one in, Herefordshire, received almost 100 expressions of interest and about 50 potential tenants went to the viewing days.

Of these, about 20 put in a tender, and from those a shortlist of five was chosen to interview.

It’s not all about who offers the highest rent, he explains, but more about who will be right for the farm, who has the most realistic business plan and who will fit in with the Duchy’s tenant community.

A strong sense of environmental responsibility is another key attribute.

The role of the Prince of Wales

According to Mr Martin, HRH the Prince of Wales likes to play his part in the selection process.

“We let the farms ourselves in-house. Invariably one or two members of the prince’s council get involved, together with the local land steward. When we get down to the last couple, I will confer with the prince before making the final selection.

“His Royal Highness will invariably ask me for more detail, such as what sort of cattle they are going to have, and takes a great deal of pleasure in finding out more about our new farm tenants.”

Mr Martin describes the prince as “pretty hands-on” as a landowner. He visits different parts of the estate about half a dozen times a year and he has met almost all of the tenants. 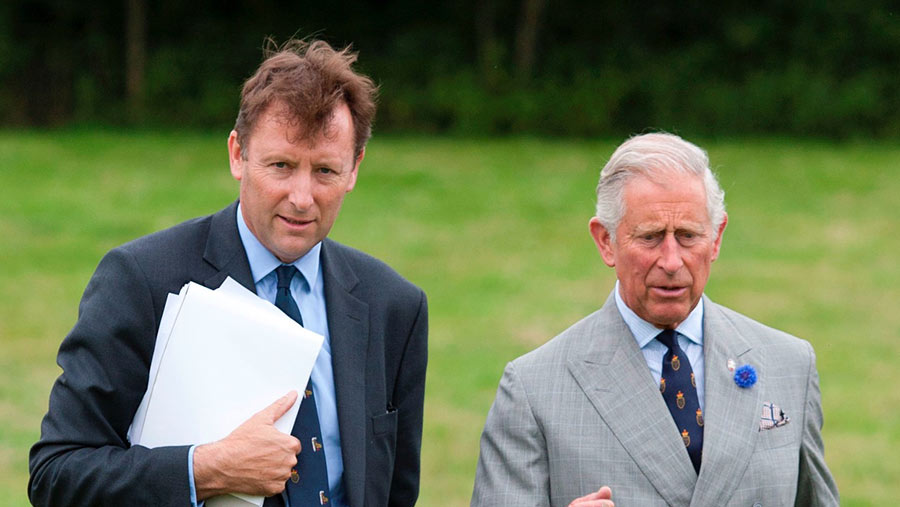 The Duchy has about 700 agricultural lettings, of which more than 200 are fully equipped holdings, the majority being let on 1986 Agricultural Holdings Act tenancies.

The rest of the farms are on farm business tenancies (FBTs), although there is still an emphasis on providing tenants with long-term security, with most new FBTs offered on 10-20 year terms, with suitable break clauses for both parties.

Since October 2015, most Duchy tenancies are of the “model clause” type, which involves the landlord and tenant sharing responsibility for maintaining fixed equipment and insurance.

This ensures the Duchy maintains a close involvement with its tenants. The Duchy is also happy to invest in its farms, and the priorities will be determined in discussion with the tenant, who will be charged interest.

Rents charged by the Duchy are “fully commercial”, though most come in at less than £200/acre. 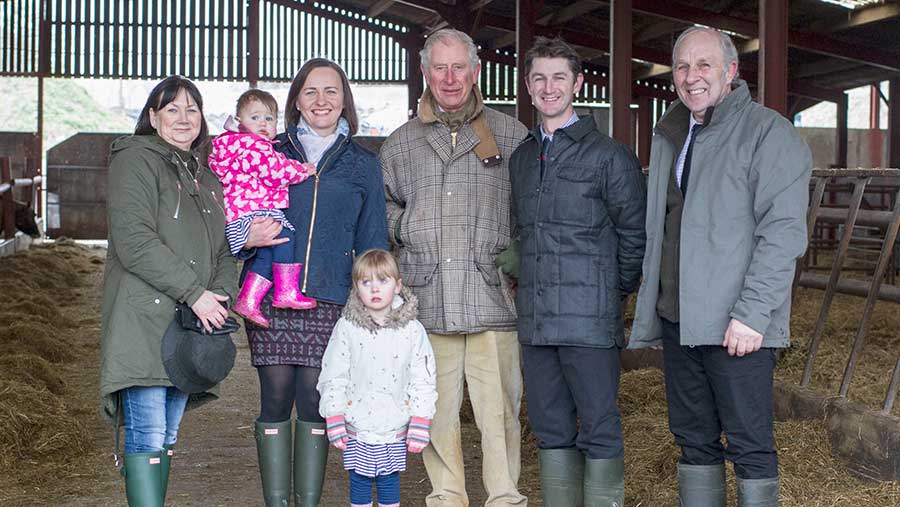 Kevin and Justyna Hughes are the latest tenants to have taken on a Duchy of Cornwall farm, having secured the tenancy of the 93ha Hill Barn Farm just over six months ago.

Originally from a beef and sheep family farm in Carmarthenshire, Mr Hughes studied agriculture at Gelli Aur before spending four years in Australia and New Zealand, where he set up a relief milking business.

“I really picked up the bug for grassland dairy farming in New Zealand and was keen to bring those techniques back to the UK,” he says.

Returning to the UK in 2010, with his new wife Justyna, Mr Hughes took up a role as herd manager on a farm near Abergavenny, where he was in charge of 300 New Zealand Jersey cattle.

“I was keen to start farming off my own bat, and was fortunate to buy my own herd on that farm. And then I saw the advert for Hill Barn Farm on Twitter and we thought, what have we got to lose?”

Having attended the farm on one of the viewing days, it was immediately apparent there was a lot to do to the property, but the young couple could see the potential and put in an application.

That involved drawing up a detailed five-year business plan, prepared in conjunction with Andersons Farm Business Consultants, and setting out a vision for the farm.

Having made it to the shortlist, Mr Hughes was then visited by Duchy representatives at the farm he was managing for interview. It did not take them long to recognise they had found the right man for the job.

“I think they could see the farm I was managing was tidy, and they liked the fact our low-input grass-based system was environmentally friendly,” says Mr Hughes. “We don’t use much nitrogen, very little diesel and we don’t buy in much fodder.

“We also have a young family, so I think that may have appealed too, as did my positive attitude.”

The tenancy is a 20-year FBT, with a five-year break clause, and the rent is phased up to £180/acre once the Duchy has completed works to upgrade the house. The Duchy is investing £200,000 in improvements to the farm, while Mr Hughes is putting in about £100,000 of mostly borrowed money to pay for a new Waikato 20/40 swing-over parlour.

The herd currently comprises 175 NZ Jersey milkers, yielding about 4,000 litres a head, with the Channel Island milk contracted to Cotteswold Dairy, Tewkesbury. Another 40 followers are set to join the herd this year.

Mr Hughes, who was visited by his eminent landlord in late February, says the arrangement with the Duchy is very much a partnership, which gives him the stability to commit himself to farm the land to the best of his ability. 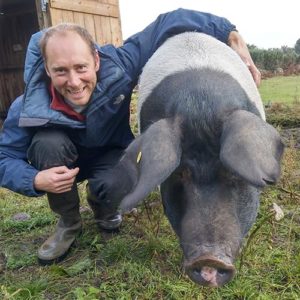 Being one of seven brothers, finding a role on the tenanted family farm in Devon was always going to be a challenge for Graham Eggins.

As such, he forged an early career in farming as a general farmworker, before spotting an advert in Farmers Weekly in 2014 for the tenancy of a small Duchy farm on the island of Bryher in the Scilly Isles.

“We’d been holidaying in the Scillies for 14 years and just love it here, so decided to go for it,” says Mr Eggins.

“The application process was quite straightforward. I got a friend who is a professional to help us with the business plan and then attended a two-hour interview at the Duchy offices in Lostwithiel. The next day we were told we were the preferred candidates.”

Mr Eggins believes he won the tenancy because of his desire to return the farm to a traditional mixed holding, following several years of the land being devoid of livestock.

And mixed it certainly is, with a small herd of North Devon suckler cows, four Saddleback pigs, 200 hens, fruit and vegetables, and a number of bee hives.

“As well as the 20ha of rented land, we also run our cows on 57ha of rough ground owned by the Wildlife Trust,” says Mr Eggins.

“That land had not been grazed for five years and had reverted to scrub, so we are helping to improve it, for which the Wildlife Trust pays us a small management fee.”

The bulk of the income comes from letting out two holiday cottages, while the farm produce is sold either to visitors who flock to the island during the tourist season, or though the regular farmers’ market held on the larger island of Tresco.

Mr Eggins is the first new tenant on the Scilly Isles for 20 years. With his tenancy guaranteed until he retires at 65, he sees himself as a permanent fixture for many years to come.