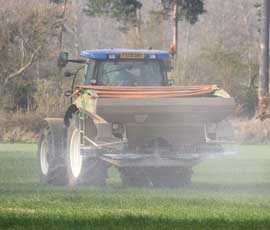 New season nitrogen prices are set to kick off 10% lower than a year ago, with a list price of £270/t for full loads of UK manufactured ammonium nitrate delivered to farm in June.

GrowHow is looking for a £3/t rise for July and is also introducing a finance scheme backed by Hitachi Capital (UK), reflecting cashflow challenges across all farming sectors.

The new prices come earlier than the traditional Cereals event launch and as granular urea prices are at their lowest for 15 months. Final orders of old-season UK ammonium nitrate are going on to farm in very late trade at just over £300/t.

Whether GrowHow might be willing to offer longer term pricing depends on how the season develops. “It’s early days, we want to test the water with these prices,” said marketing manager Ken Bowler.

While UK ammonium nitrogen prices over the season just closing had been well below that of continental Europe, the new list prices were similar to those in other European countries, said Mr Bowler.

With cropping plans on many thousands of acres up in the air for long periods over the past autumn and winter, ammonium nitrate deliveries were down by about 6% on expected levels by the end of March and compounds were about 10% lower than expected.

The finance scheme will offer a term of six or nine months’ unsecured credit and, while interest rates are not due for release until the end of the week, these are expected to be in the region of 8% annual percentage rate.

Following the withdrawal of ING from the UK inputs finance market last year, it had been hard work to find a funder, said Mr Bowler.

The new season prices would be attractive enough to tempt some growers but cashflow was a real issue, said AtlasFram inputs manager Andrew Merton.

Granular urea is at about £300/t delivered to farm spot and available at very close to this price right through to November, providing keen competition for ammonium nitrate prices. Elsewhere in the trade, phosphate and potash prices are steady.

Later nitrogen may be key to wheat yields