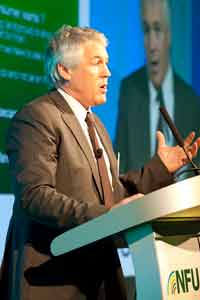 Understanding consumer perceptions and being totally open about production methods have been central to the growth and profit of Kelly Turkeys, managing director Paul Kelly told the NFU conference.

Too often agriculture was on the defensive, he said, giving consumers the impression farmers had something to hide.

At Kelly Turkeys, the emphasis was on being as open as possible, inviting journalists to write about turkey production, going out to shows to talk to the public, linking up with celebrities to raise the profile and inviting the public on to the farm.

“It’s always a privilege to talk about our business and our products – never a chore,” said Mr Kelly. He rejected the suggestion that consumers were always naïve about where their food came from and should not be reminded that animals had to be slaughtered.

His business sold some 1900 turkeys direct to consumers from its farm shop near Chelmsford, Essex, in the two days before Christmas compared with 250 for the average butcher, he said.

KellyBronze turkeys, which were always sold boxed with a meat thermometer and a cookery booklet, fetched a premium price of £10.50/kg, compared with just £2/kg for bottom of the range frozen turkeys.

Another example of marketing initiative was Kelly’s ginseng turkey – birds fed with renowned aphrodisiac ginseng and sold under the catch line “Buy a Kelly bronze and bonk your way through Boxing Day”.

Mr Kelly said his aim was to build his business to create 100 Kelly Turkeys farms around the country, taking on selected producers in targeted areas.

* For a comment on this story, see Phil Clarke’s Business Blog