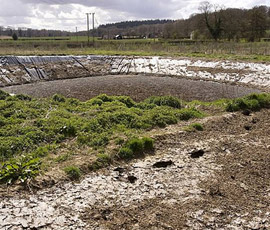 NFU Cymru president Ed Bailey has challenged the Welsh Government to justify a proposal which will force farmers to replace ageing slurry, silage and fuel stores.

Mr Bailey insisted that a consultation document seeking to amend the Silage, Slurry and Agricultural Fuel Oil (SSAFO) regulation did not provide evidence demonstrating problems with stores built before the regulations came into effect.

Structures built before 1 March 1991 may have to be replaced but Mr Bailey argued that these are soundly built and pose no pollution threat.

He has written to Wales’ environment minister, John Griffiths. “A significant proportion of these structures will have many years of useful life left in them,’’ he said.

“There is no good reason or evidence to suggest that in these circumstances farmers should be forced into the huge cost of having to build new structures by 2015.’’

And neither does the consultation document provide an impact assessment estimating the cost to the Welsh agricultural industry of the changes, he added.

“We believe that the cost to the industry would be huge and we do question what evidence there is to justify the proposed change.’’

The consultation document also proposes that farms outside NVZs would need to build storage for slurry equivalent to those within the zones. Only 3% of farmed land in Wales currently falls within NVZs.

“We are disappointed that this proposed change has effectively been hidden within this NVZ consultation document meaning the majority of farmers are unaware of a rule change that could potentially have huge implications for their farming businesses,’’ said Mr Bailey.